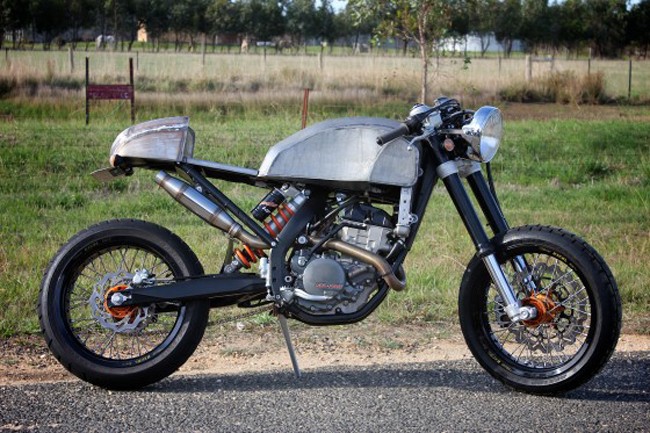 How to build your own custom KTM cafe racer

Home » Blog » How to build your own custom KTM cafe racer

Well, while I can’t give you play-by-play instructions, I can show you how one bloke built his own and you can do your best to replicate. There are few things that get me more excited than a featherweight, rippable, KTM cafe racer.  In the past, we’ve featured bikes like Drake McElroy’s CR250 cafe, Wrenchmonkee’s RD400 and two of Roland Sand’s builds; a KTM 530 cafe and another clean KTM 525.

I discovered another stunning custom KTM supermoto-to-cafe conversion a few weeks ago.  I’ve been sitting on this waiting to pull a post together, lagging I admit.  I woke up last Saturday morning to see that Return of the Cafe Racers had beat me to breaking the story.  Though I wasn’t the first, I feel obligated to share because it’s just too damn cool.

Australian professional drifter Nigel Petrie is really a car guy.  He claims to spend all day thinking about cars (not bikes like most of us).  He runs a blog ‘Engineered to Slide‘ that’s dedicated to automotive drifting and is an active competitor in the sport.  Nigel wanted something fun to tear around town on two wheels.

Growing up riding BMX and motocross, he learned how to make a bike his bitch. So naturally, he got the best motorcycle he could find that he could drift with. He landed on a 2008 KTM 250EXC-F. After riding it on and off road for a few years, he decided one day that the bike needed a facelift.  Being quite handy with the welder, in three weeks he cranked out this custom KTM cafe racer that could still perform like a beast but look like a beauty.

Here’s Nigel tearing around on his custom KTM: