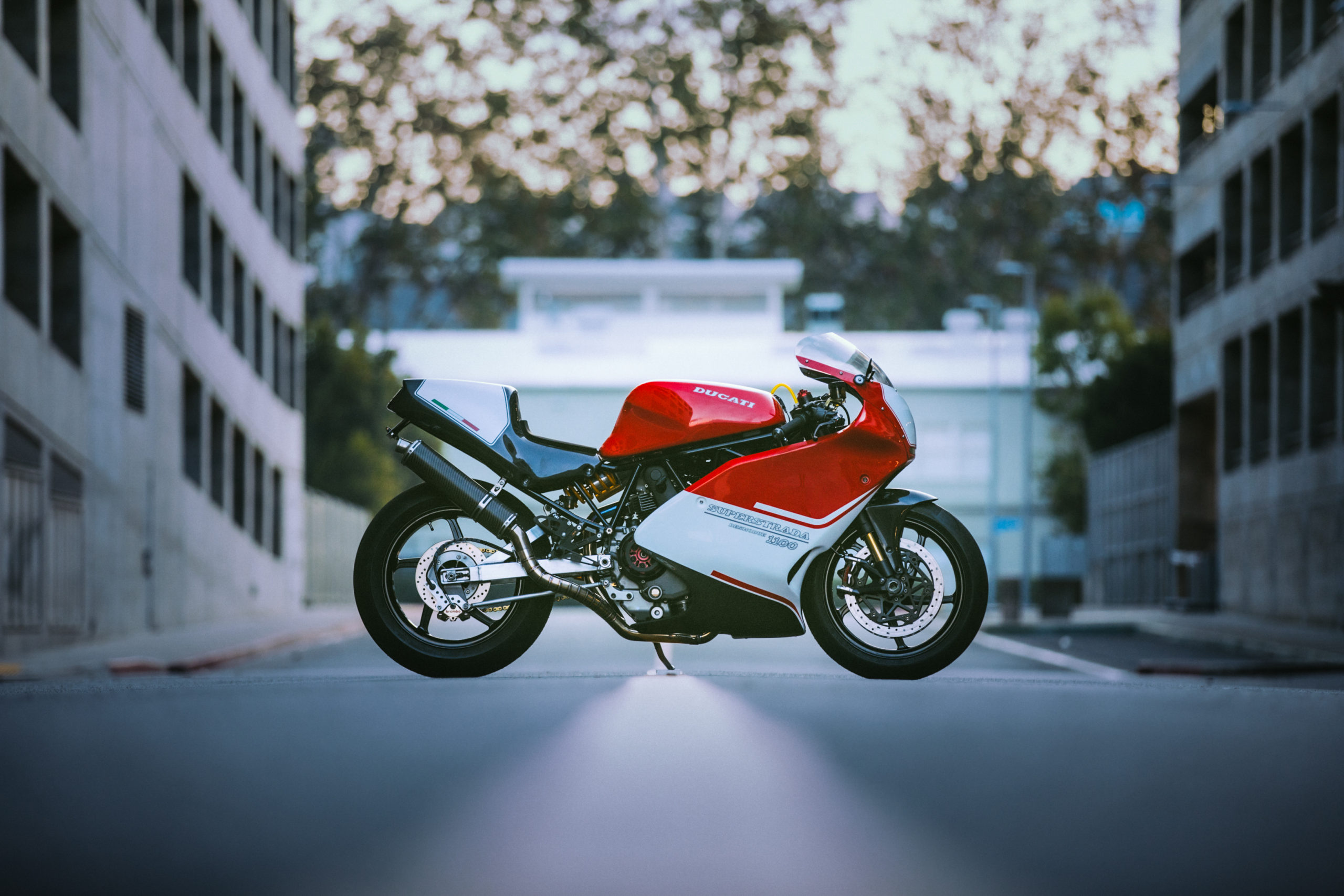 I met Mike Vienne in person a few years ago at a track day and he had shown up with some pretty killer builds. Over conversations not only discovered that he builds awesome “track ready: street legal” bikes but that I had actually featured one of his previous builds; a Triumph T120R on The Bullitt back in 2014. Small world! Needless to say Mike stayed in touch and when he started working on his super-light Ducati 900 SS SuperStrada we wanted to hear and see more. After wrapping up the build, we eagerly waited for some details and photos. Mike shared a detailed write up in the Championship Cycles Ducati 900 SS SuperStrada and share the story in his own words below. 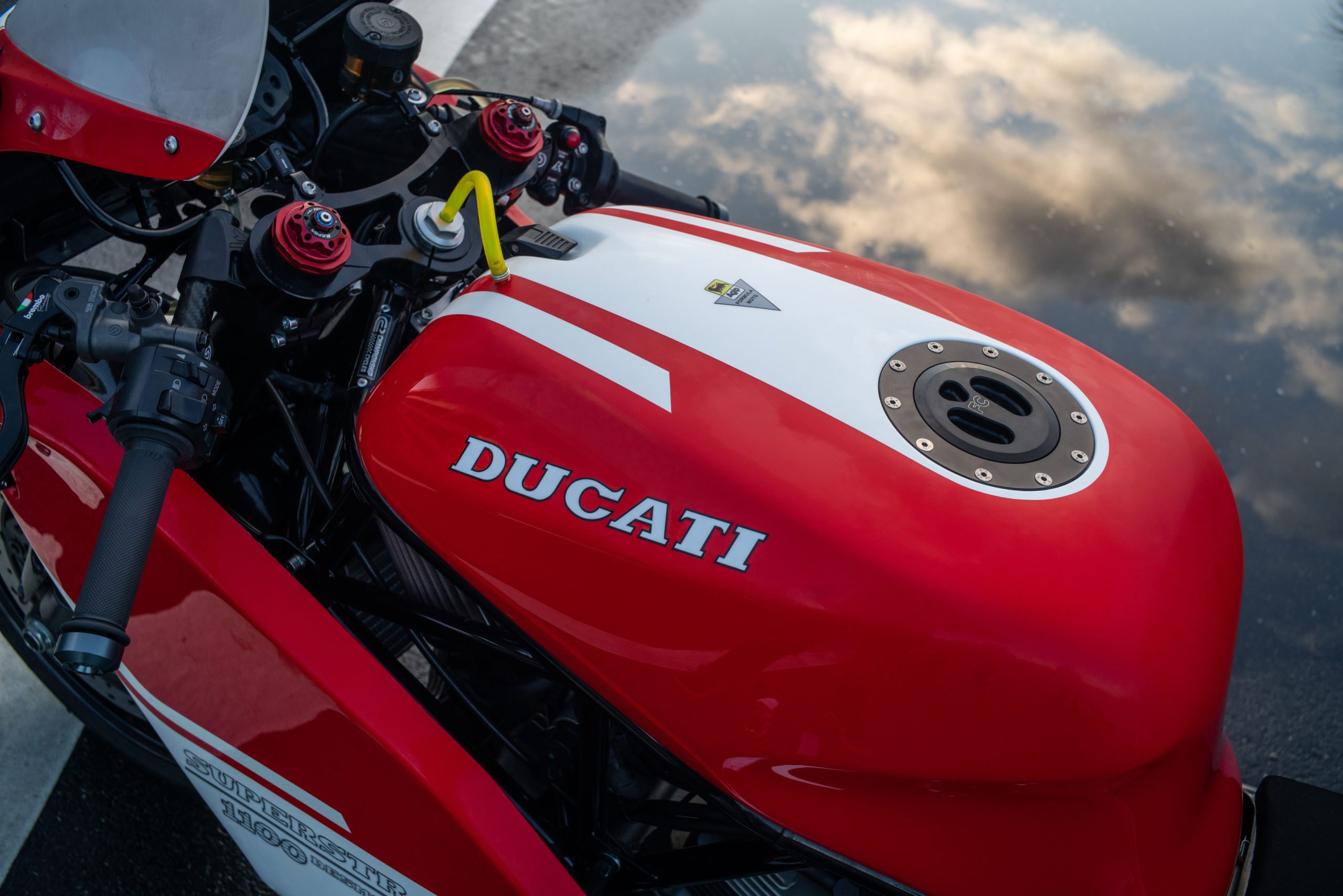 “Sandro Parra (Service Manager at Pro Italia) actually connected the owner with me. The client wanted to to revive his very worn out 1995 900SS. In it’s past it had been through a few mechanics and been modded with several upgrades (carbs, wheels, etc) but it was ridden hard and put away wet. From a distance the bike looked ok, but the nearer you got… It had been sitting parked for many years after the motor gave out. A good portion of the original bodywork was damaged and the tank and carburetors were caked solid with the evaporated remains of 5 year old fuel.

As these things typically go, there was a process. Expectations versus funds versus reality. Many discussions regarding the very ambitious goals coupled with a less than equal to the task budget was an early challenge. I compiled a quick (long) list of what it would take to fix everything that we were starting with which led me to conclude that in fact, there wasn’t all that much. From what we had to start with, the idea of trying to obtain Superbike levels of performance was going to be difficult on the initial budget. 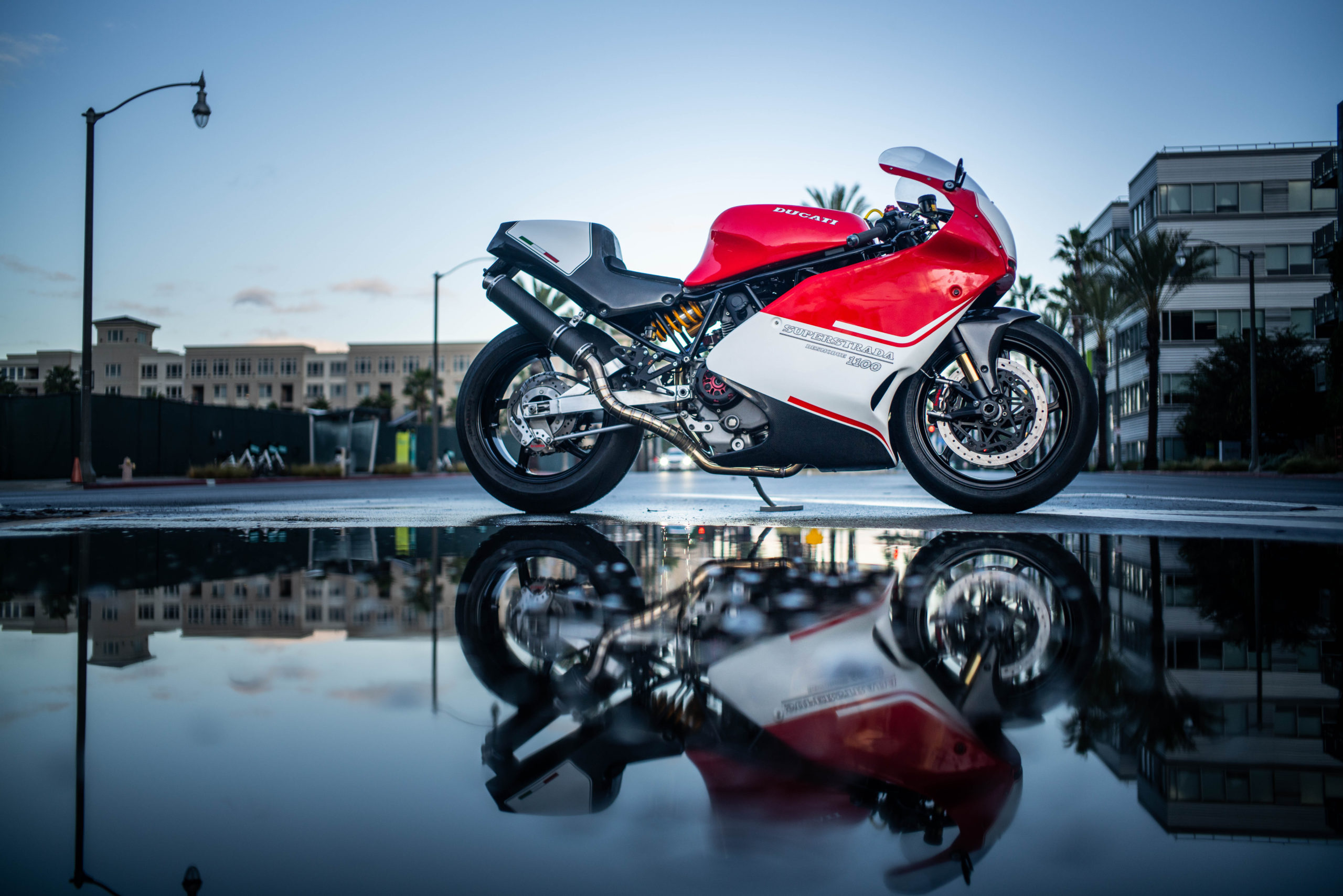 The 900SS is an iconic motorcycle. In fact, the first Ducati I ever rode was my buddy’s back in the early 90’s. I loved everything about it immediately  (the torque, the sound, the Italian “soul”, did I say, the torque!) but it’s a SuperSport afterall not a 916 and its very heavy. 415lb dry, I think.

So, like most all of my builds I chose to focus on handling and lightness as the foundation of the build. Lotus design engineer Colin Chapman once said, “simplify, then add lightness”. I use that a lot. Performance upgrades to the broken motor were discussed and dismissed. Upgrading and rebuilding the existing motor and carburetors was going to be costly and ultimately less than satisfying from a performance standpoint. In terms of horsepower, the stock bike puts out roughly mid 70’s. I proposed that we build a more modern version of Ducati’s own 900SS Superlight, which was a limited edition, produced for 2 years in the mid 90’s, with a few carbon bits and Marvic wheels, etc. It’s pretty collectible now. 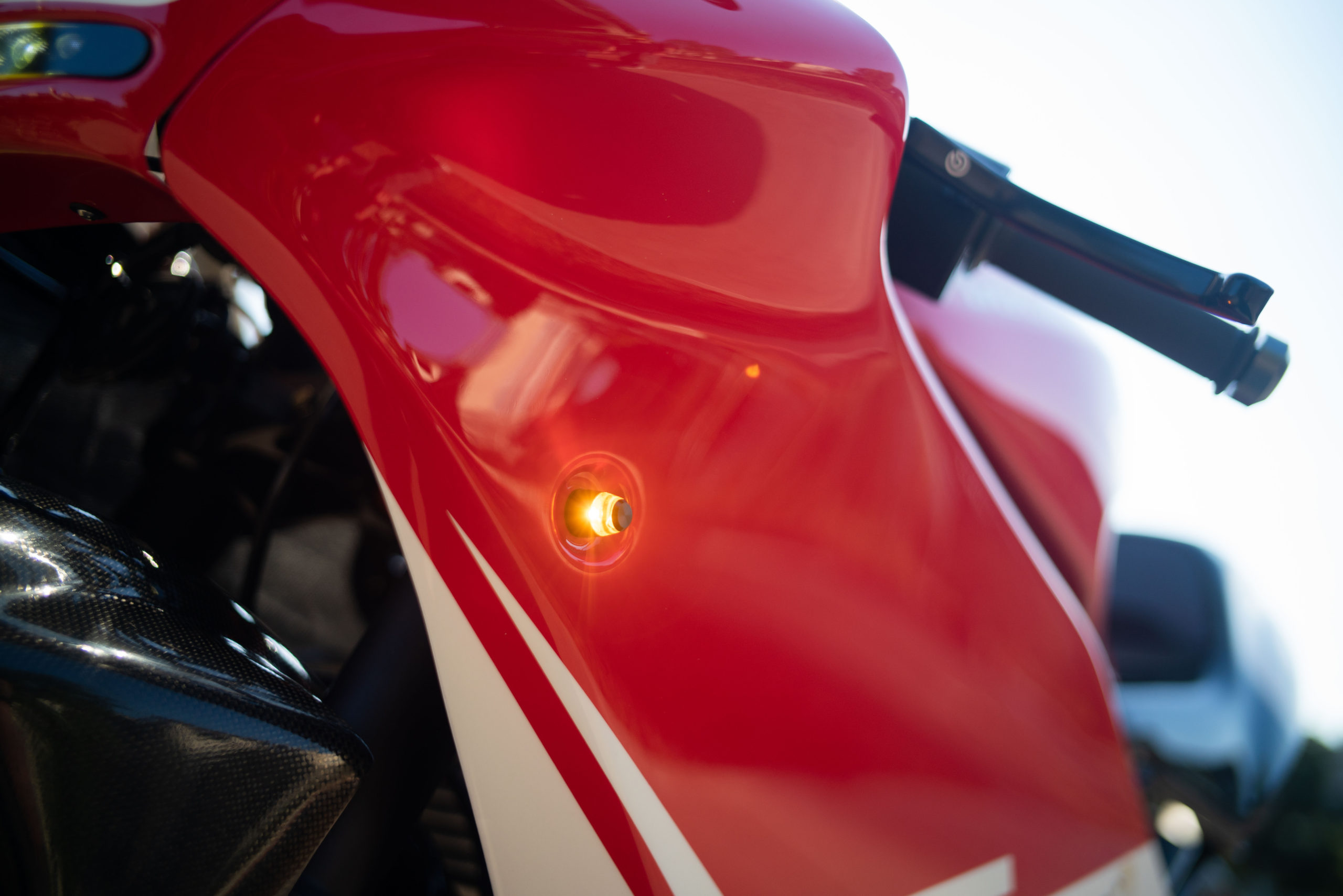 Anyway, rather than fix what we had (which was just about everything), I floated the idea of upgrading everything all in one go, while keeping the outward appearance of a classic 900 SuperSport. A  EFI Monster 1100 Dual Spark motor could work with relative ease with the existing chassis and swingarm and due to newer manufacturing processes it would actually be lighter than the original 900SS engine. Plus you gain a modern reliable mappable ECU in the process all of which was rated at 95hp. Stepping up to fully adjustable suspension and radial brakes would both be significant upgrades over stock as well.
Ultimately, as the enthusiasm for the bike grew so did the budget and subsequently more money was allocated to the project. We ended up removing the stock fork internals and replacing them with a Mupo cartridge kit and while they were apart anodizing and Ti Nitride coating the external pieces to give us the look we were after.  Likewise, the brakes were replaced with Brembo’s high end billet GP-4RXs clamping down on BrakeTech’s Iron Axis rotors via a new Brembo Corsa Corta radial master cylinder. Essentially we upgraded the upgrades. 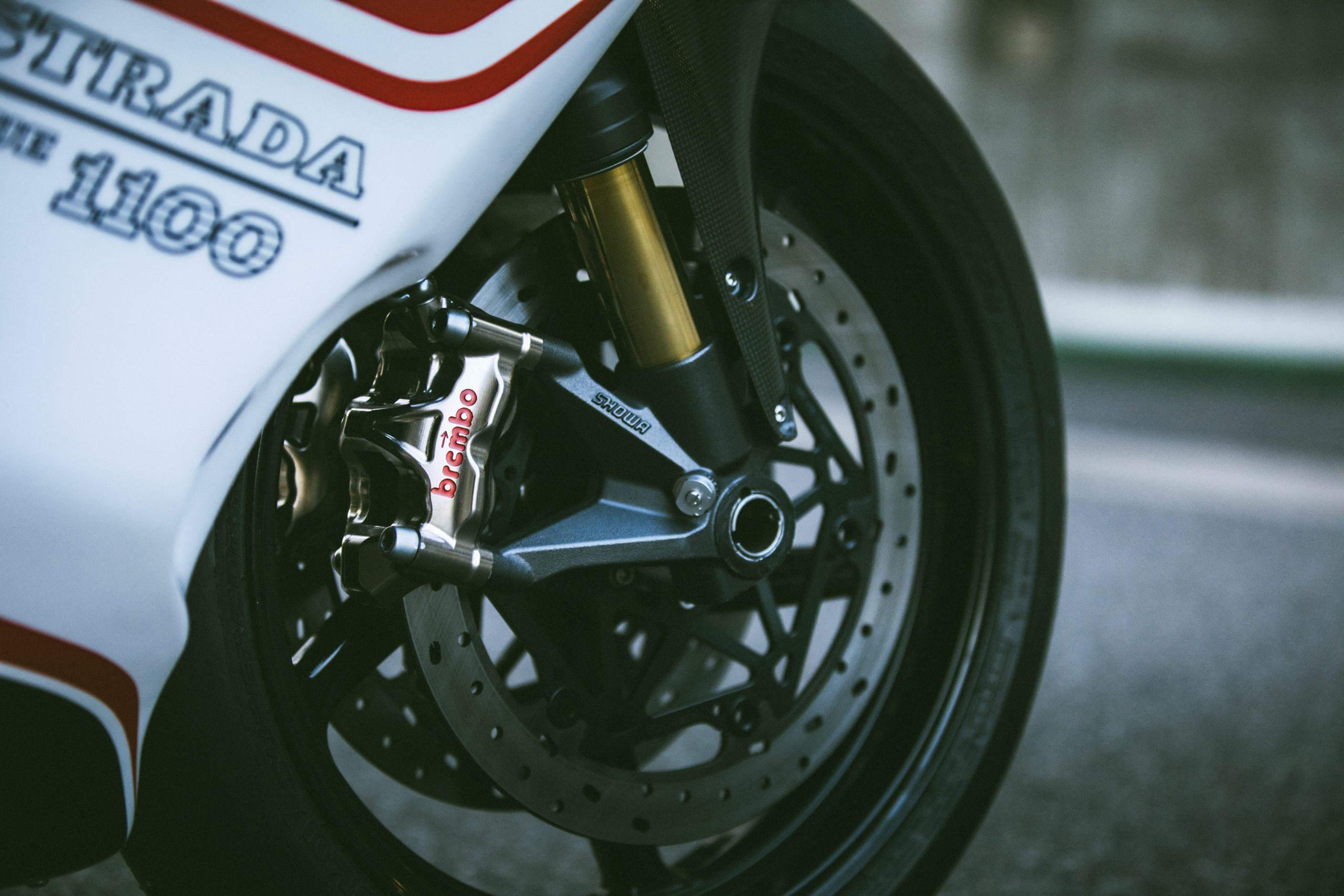 The stock oil cooler was up specked to a higher capacity custom mounted Febur unit to keep engine temps in control on hot Southern California days. And I added a few additional performance enhancements that I think all modern bikes (especially Ducatis) benefit from: a Yoyodyne slipper clutch, a quick shifter, a set of performance air intakes to help it breathe more freely and I reflashed the ECU. 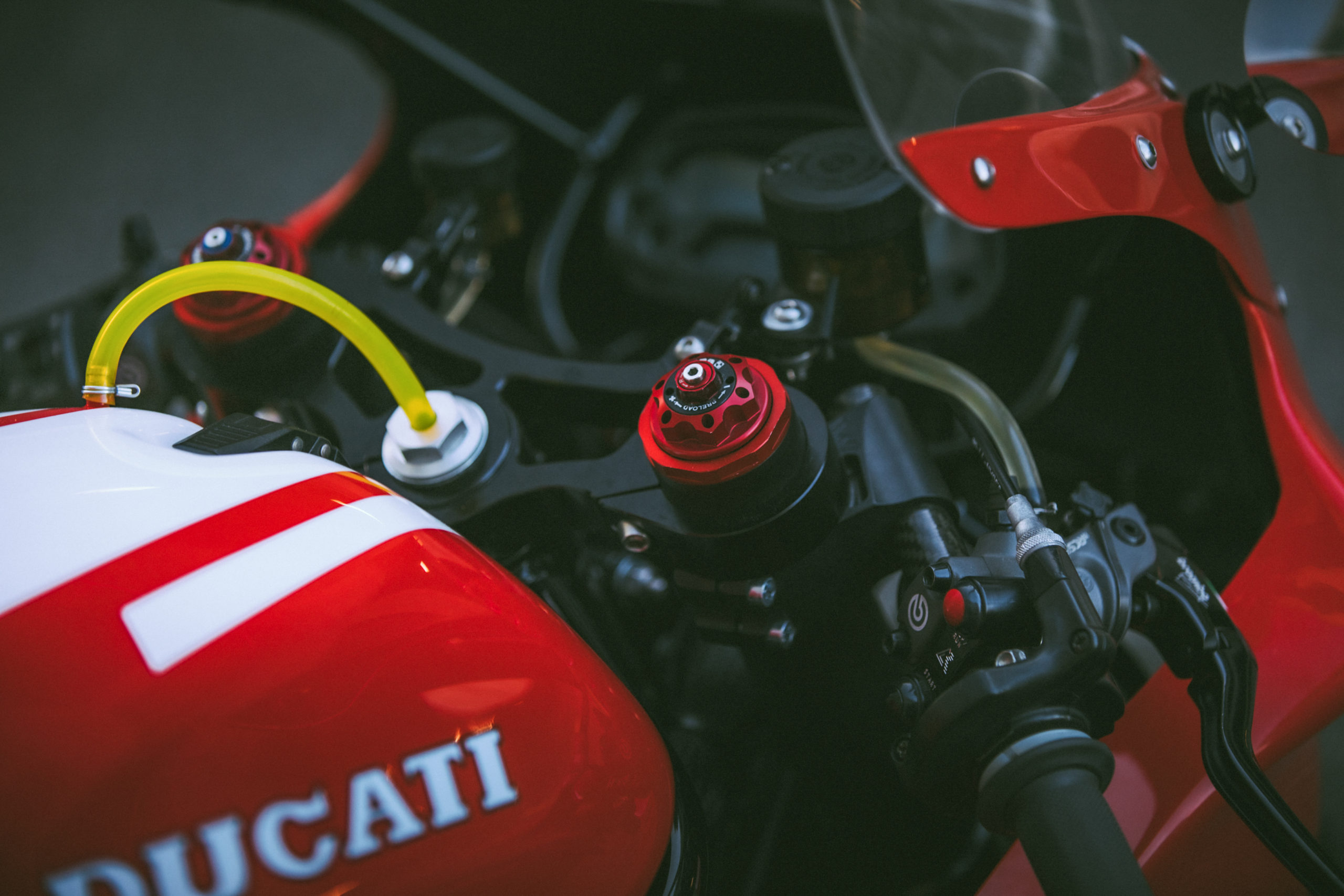 In a continuing effort to keep the weight in check the bodywork is all carbon. I was able to find an unobtainium set of original Ducati Performance carbon side panels and had a tail and nose fabricated to match. The fuel tank is actually a kevlar fuel cell. Combined those items alone shed about 20lbs of unnecessary weight!
Then I went about trying to lose more gratuitous weight: detab the steel frame, remove all nonessential wiring and componentry. Fabricate a bunch of bits out of light weight aluminum in lieu of using the o.e. heavier steel parts.  Discreet LED lighting and a simple race seat pad replace their heavier counterparts. Essentially, strip it down to it’s core elements. It all sounds simple enough, but in reality it took much more time to ensure everything was going to work and play nice together. Ultimately, there’s room to gain even more weight savings in the future (i.e wheels) But as it sits right now we ended up right around the mid 300’s weight wise – and that’s with a full fuel load.

After it was all together (before final disassembly for paint and powdercoat) I took the bike up to Willow Springs for a few shakedown laps on the big track and I have to say it’s pretty fantastic. The suspension, brakes and overall lightness come together really well and allow you to dive into any corner much deeper and later than ever before. It’s not going to outrun a modern liter bike down the front straight, but you’ll certainly out brake them going into the first corner, get it turned and back on the power ahead of them. And quick transition corners like turns 3 and 4 of the Omega are effortless.

However, in the end the bike is much more likely to spend time carving roads in the nearby canyons than on the track- so we stepped away from the Superlight moniker and I chose SuperStrada as it’s new name. The paintwork and graphics are an homage to the Cagiva era bikes, yet with a modernish feel.  I’ll tell you though it took quite of bit of work to get those wavy original fairing panels straight so that the paint looks like glass, but the results speak for themselves.” – Mike Vienne of Championship Cycles 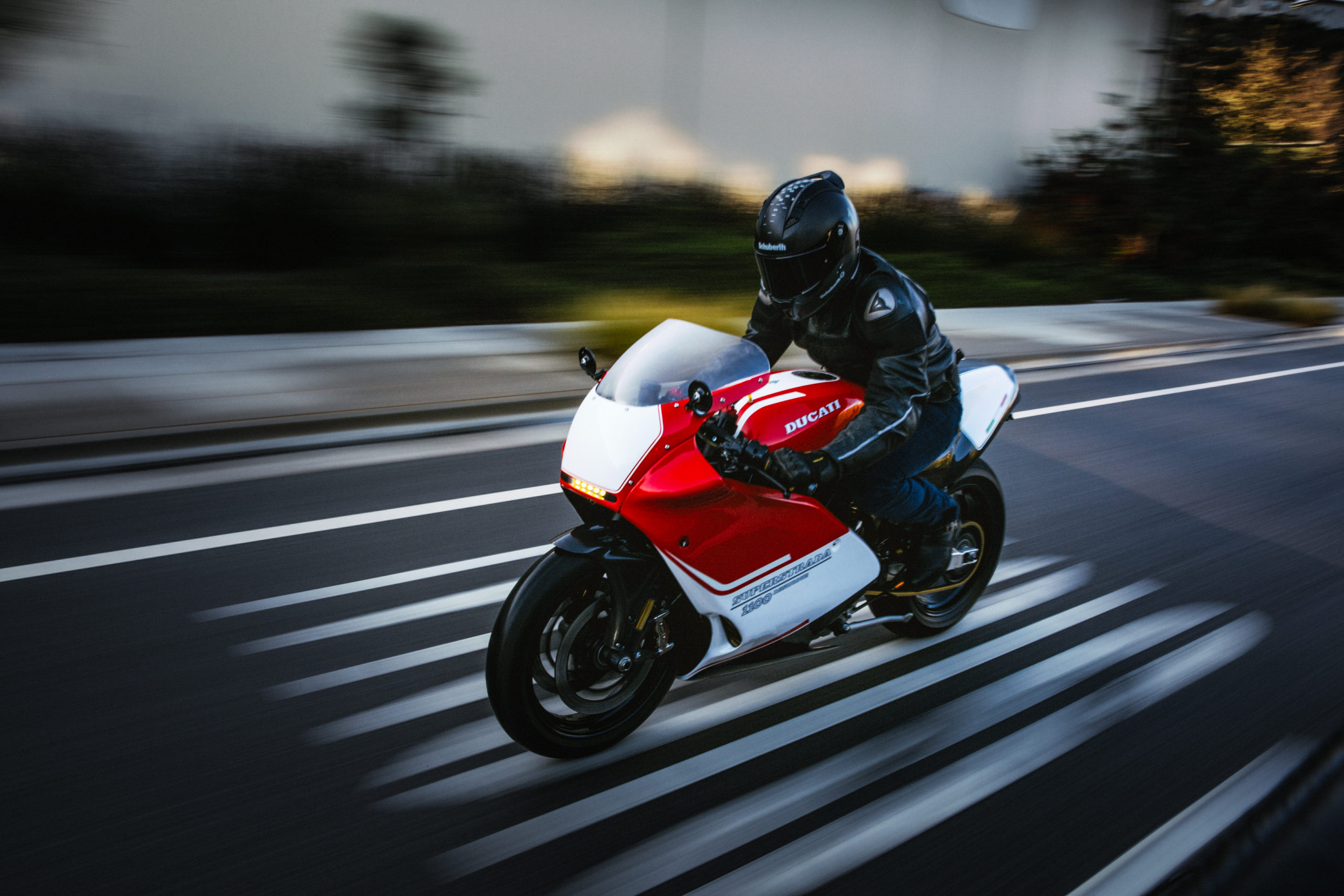