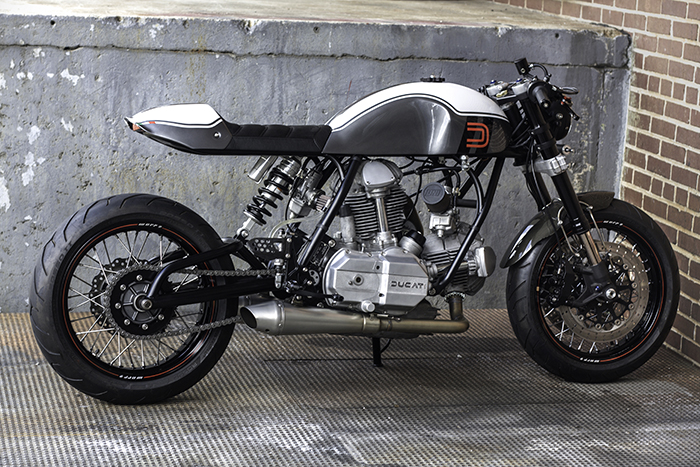 Bryan Heidt is no stranger to the custom world – he’s metal fabricator with a background in Industrial Design – and works with Bryan Fuller at Fuller Hot Rods. His beautiful custom 1975 Ducati 860 square case named Cavallo Nero (Italian for ‘dark horse’) was actually Fuller’s bike but with no immediate plans for it and a barrage of impending projects coming in, the bike sat in the shop taunting Heidt.

When Bryan shared his story with us, it became abundantly clear that a lot of blood, sweat and late nights went into this build and he certainly had a lot to say about the work he put in. In cases like that, why not let the builder himself tell you the story as it is?

The bike started as a motor and frame that Fuller picked up from the bevel drive Ducati wizard Rich Lambrechts at Desmo Pro in Ft. Lauderdale. It sat on our mezzanine at the shop for some time, taunting me all the while. Fuller had no plans for it and the shop was always too busy to start any speculative projects, so there it remained for a couple years.

One day on a whim, I took an old Benelli Mojave tank we had laying around and stuck it on the frame. It suited the bike to a T and I was hooked; I had to see this thing built. I proposed a joint project with Fuller, with me handling all the designing and building of the bike on my own time. I got to see my ideas for the bike come to life; he got a spec project moving without taking up shop time. Win and win. 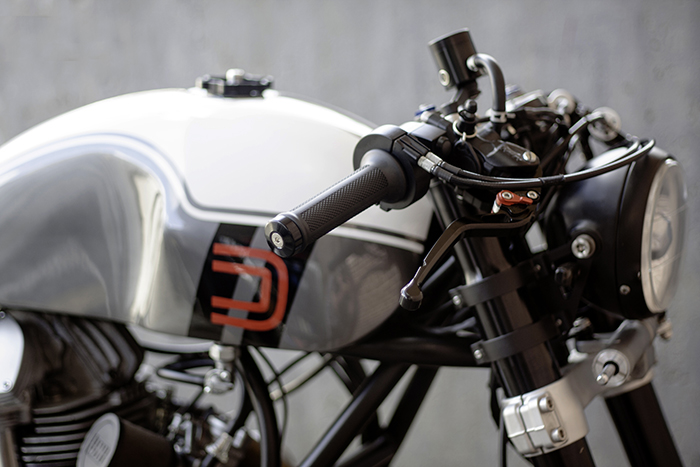 The plan for the bike was to keep a classic look, but make it handle and stop like a modern sport bike. To this end, a 2007 GSXR 750 front end, R6 rear shock, and some Ducati Sport Classic wheels were sourced to get the project rolling. Putting in time after work and on the weekends, I started mocking the bike up.

Around December of 2014, the bike was a roller and Fuller surprised me by giving me the bike as my year end bonus and as a thank you for 6 years of working with him on some crazy projects and hardcore deadlines – throughout which, I earned the nickname Super B. As you probably guessed, I happily accepted and that’s when things began to snowball. 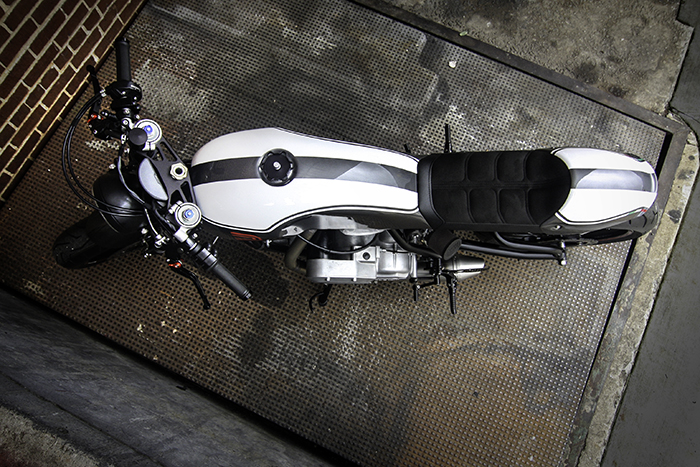 The initial concept was to keep the build simple. However, now that the bike was mine, I decided to take the modern but classic theme up a notch. The stock Delorto carburetors worked great, so those got to stay. The carbs and all of the engine cases then got vapor honed to bring everything back to, or better than new. The electronics were a different story.

The stock stator only put out 110 watts. This wasn’t going to cut it with the new digital ignition, Motogadget M-unit and Motoscope Pro gauges. A stator from a modern 900 Super Sport fit with minimal modification and put out a more desirable 200 watts that keep the H4 xenon headlight bright and the lightweight lithium-ion Antigravity battery fully charged. 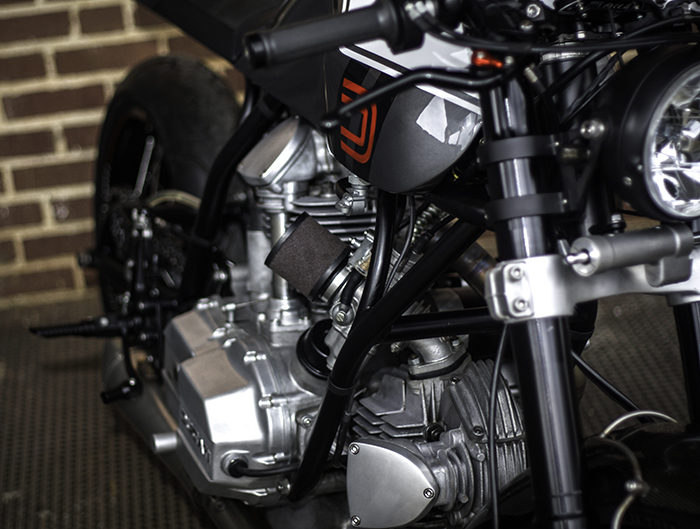 The 860 was the first Ducati to come with an optional electric start, so of course, I had to include that as well. Little did I know, the parts for the electric start are about the hardest thing to find for these bikes. After tirelessly scouring the internet, the best I could come up with was a remote chance at one from Australia.

I kept a constant watch on eBay for 2 years. One finally came up just in time for me to make it to the Handbuilt show in Austin as an invited builder. Needless to say, it was a huge honor to be included among some of the top builders in the country. 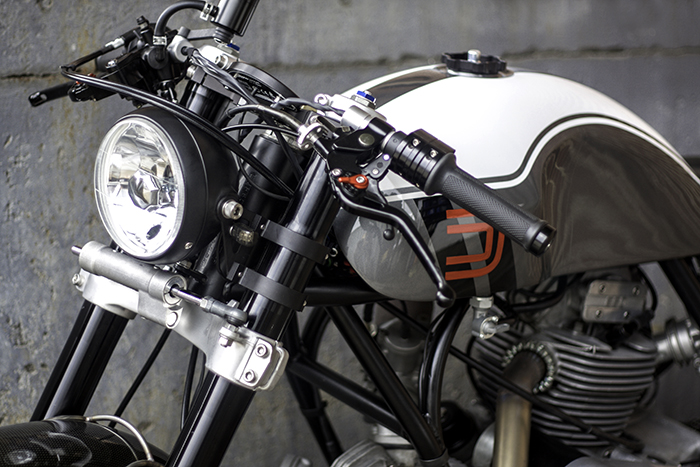 While I kept the front hub from the Sport Classic, the rear got swapped to a KLR 650 due to chain clearance issues. Both hubs were then laced to lightweight SuperMoto rims and wrapped with Pirelli Diablo Rosso tires. The front tire is covered by a cut down carbon fiber fender from a Monster 800 and mounted to the bike with a stainless bracket I fabricated.

To match the clip-on handlebars from the GSXR front end, the stock foot pegs were removed in favor of a pair of GSXR rear sets. This puts the rider in a more performance-oriented riding position. 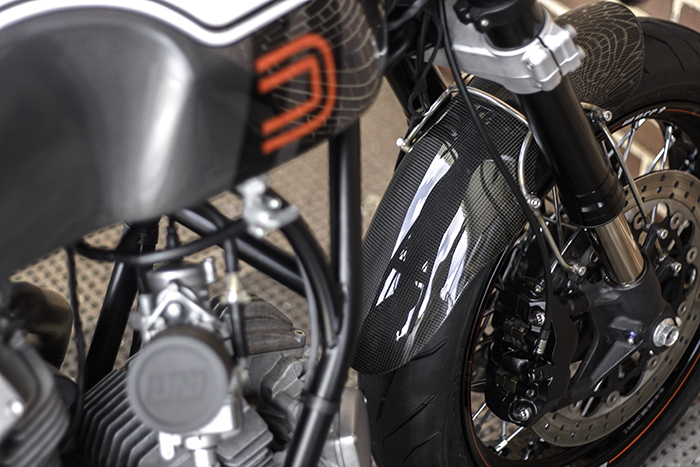 The rear swing arm got cleaned up and braced for the R6 mono-shock conversion. The rear half of the frame was completely re-done to give the rear a lighter, more open appearance. To top it off, I made a custom aluminum seat pan and had it covered by Love’s Trim in Hampton, Ga.The fully upholstered seat looked great, but I had started down the path to full custom and needed to step things up a notch or two. One of those steps was the hand formed aluminum tail cover that gives the seat more of a race bred appearance. 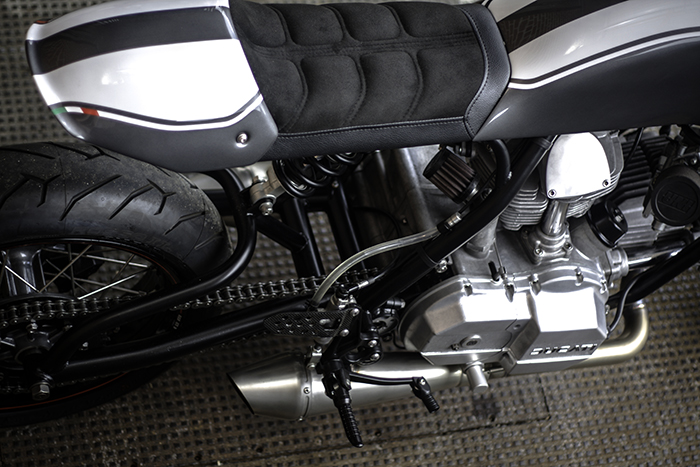 On a similar note, the Benelli tank that had inspired the build years before had, at this point, become extremely popular and would no longer set the bike apart. To remedy this, I cut out the sides and added some more dramatic lines. While I was at it, the bottom of the tank was remade to fit tighter to the frame of the bike.

After the mods, I picked up an additional gallon of capacity, giving the bike some extra time between gas stations. The tank and tail were expertly painted in a dark graphite metallic from Mercedes-Benz by Joe Patterson at JDK. While I generally subscribe to the philosophy “no custom is finished without pinstripes,” the theme of this bike didn’t call for long, swooping, pencil thin lines of color. Instead, the ever versatile Chastin Brand added some small, detailed touches and a classic Ducati graphic to give the paint an almost factory look. 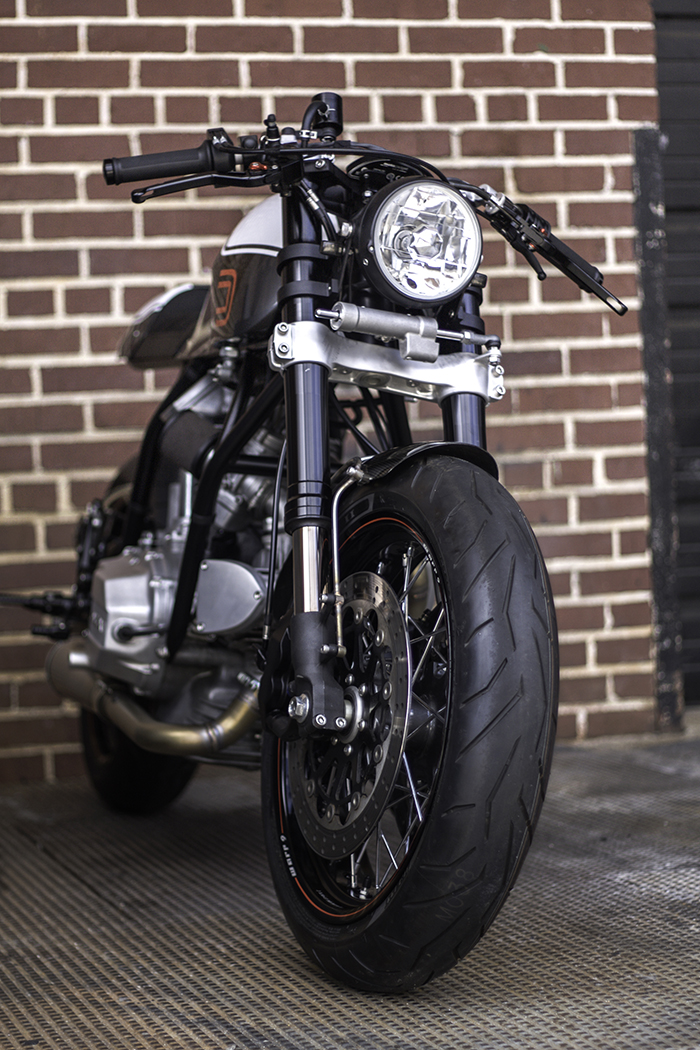 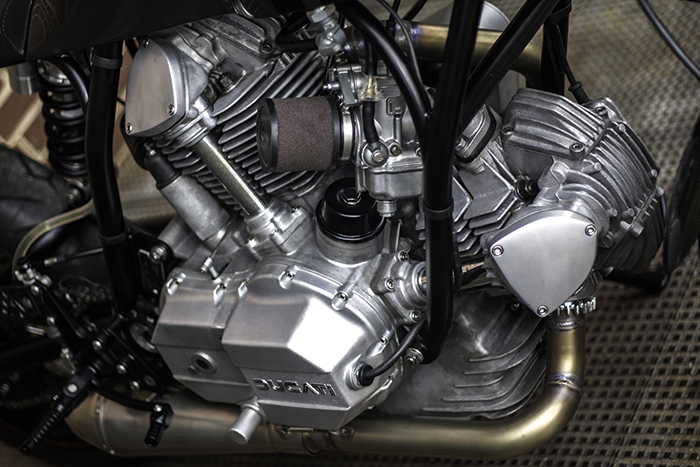 Thanks to the updated electronics and some finely tuned carburetors (thanks to my good buddy Wes!), the bike fires up the instant the Motogadget M-switch is pressed.

With the exhaust rumbling through custom stainless pipes and a pair of reverse megaphone mufflers, the 860’s stock 65hp is sufficient to swiftly propel the bike forward after its considerable diet. However, sufficient isn’t the goal. After the Barber Vintage festival, the bike heading down to Desmo Pro for Rich to rebuild the motor with high compression pistons and a port and polish. 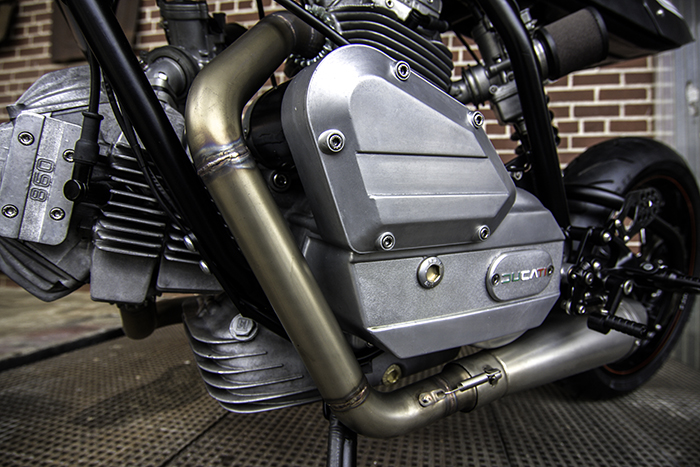 Those modifications should put the old girl at around 80 hp. The inverted race forks and rear shock allow the rider to hug corners like the original designers could have only dreamed of 40 years ago. To cope with all the new found acceleration, the radial calipers and 320mm rotors provide ample amounts of breaking.

While the 860 is now both nice to look at and a blast to ride, I wanted to make it stand the test of time, too. All of the nuts and bolts were swapped out for stainless steel and everything but the tank and tail is covered by either powder coat or anodizing to ensure the finishes on the bike will stay like new for years to come. 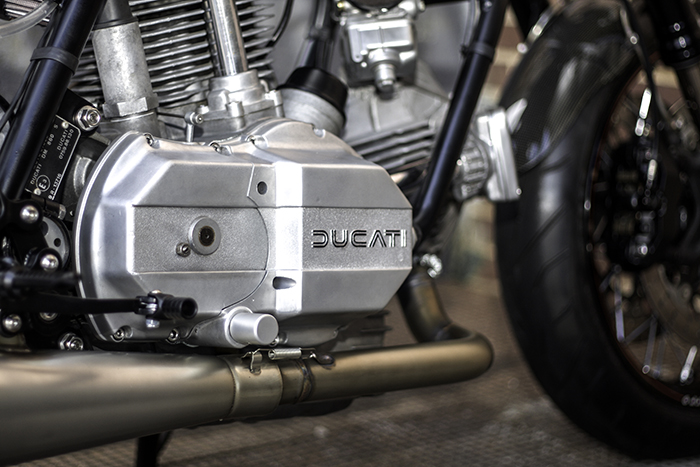 From the moment I saw that frame and motor, I couldn’t stop thinking about ways to bring them back from the brink. After four years, a little luck and plenty of long hours, this bike has far surpassed those initial concepts. For now, this is my personal benchmark, and I couldn’t be more proud of it. But high scores and lap records are meant to be broken. Let’s see where I can go from here. 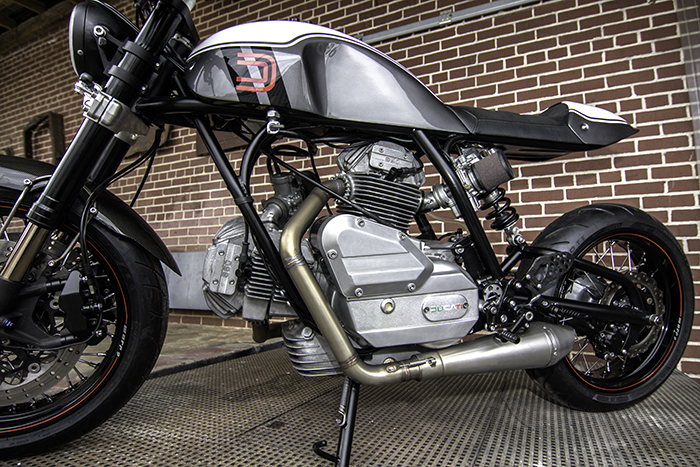 Keep up the good work, Bryan. Looking forward to seeing what you come up with next! In the meantime, you can keep up with Bryan on Instagram.
Photos by Chris Downs