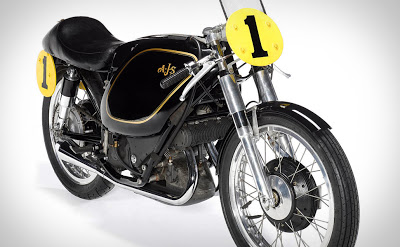 With a name like that, you wouldn’t expect the 1954 AJS E95 Porcupine Racing Motorcycle ($750,000-$950,000; Auction) to be very comfortable. And maybe you’d be right — but the Porcupine wasn’t built for comfort. It was built for speed. Described as the “Holy Grail of British motorcycles,” the Porcupine is the only twin-cylinder motorcycle ever to have won the 500cc World Championship. This particular specimen was one of only four E95s to be built, and features a spectacular exposed clutch, an AC fuel pump that humorously requires the bike to be stood on its rear wheel for priming, a full 54bhp or power, and a streamlined design, and underwent a complete mechanical restoration in the early ’00s, meaning that it should run as well as it did more than half a century ago.  via uncrate