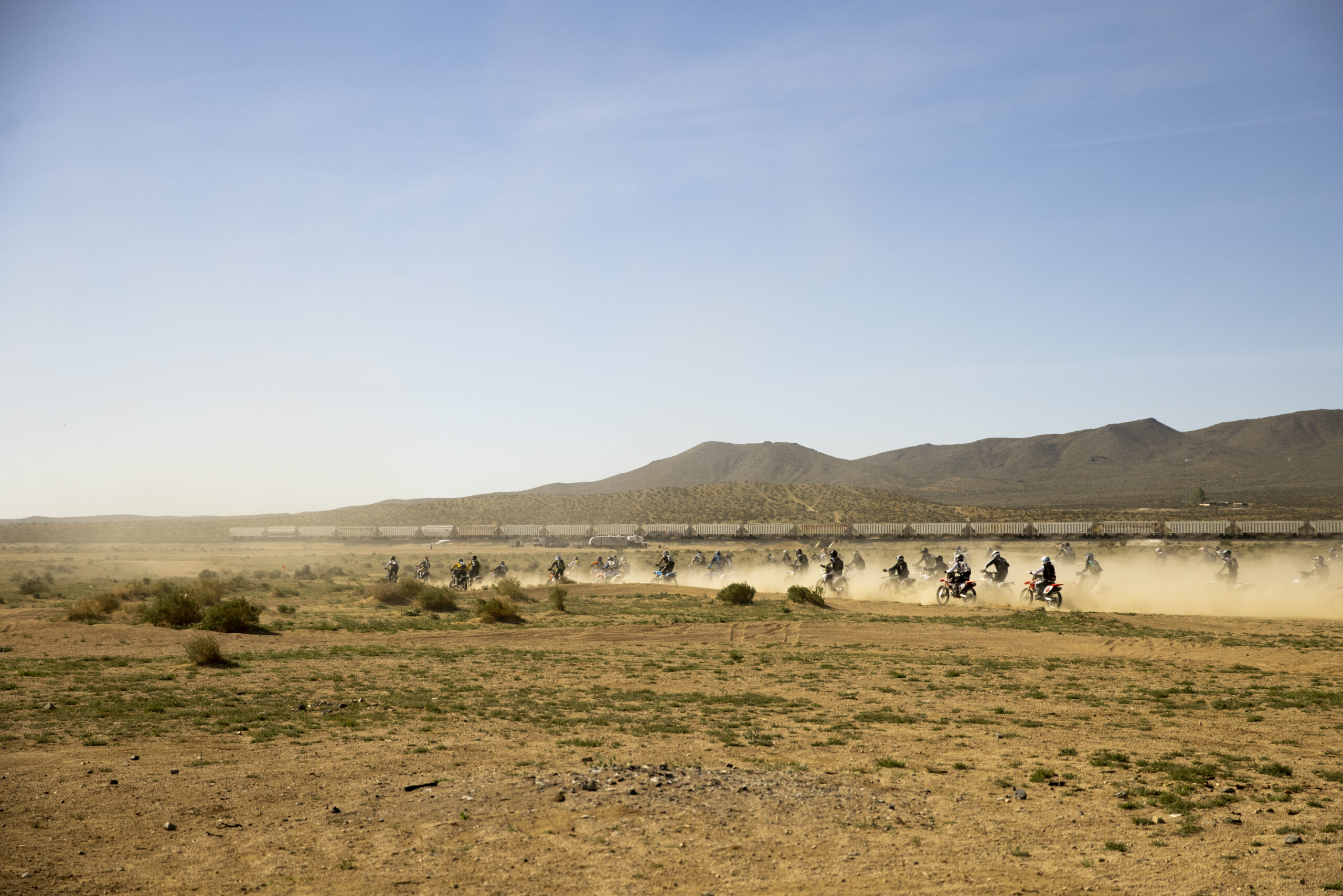 Taking a beating, and coming back for more

There’s something special about putting man and machine against one another, battling it out against the elements. The high desert of Ridgecrest, CA can be an unforgiving place, ripe with sandy washes, rock gardens, open single tracks, whoops and dust. Lots of dust. And in this scenario, the ‘machines’ varied quite a bit. In my particular case, the 500 lb. Triumph Scrambler was far less capable than the majority of modern dirt bikes out there. That said, there was no shortage of vintage machines in the running, hell, even a Vespa or two. Each one of us that gridded up on a less-than-modern dirt bike knew what he or she was getting into. At least we thought we did. 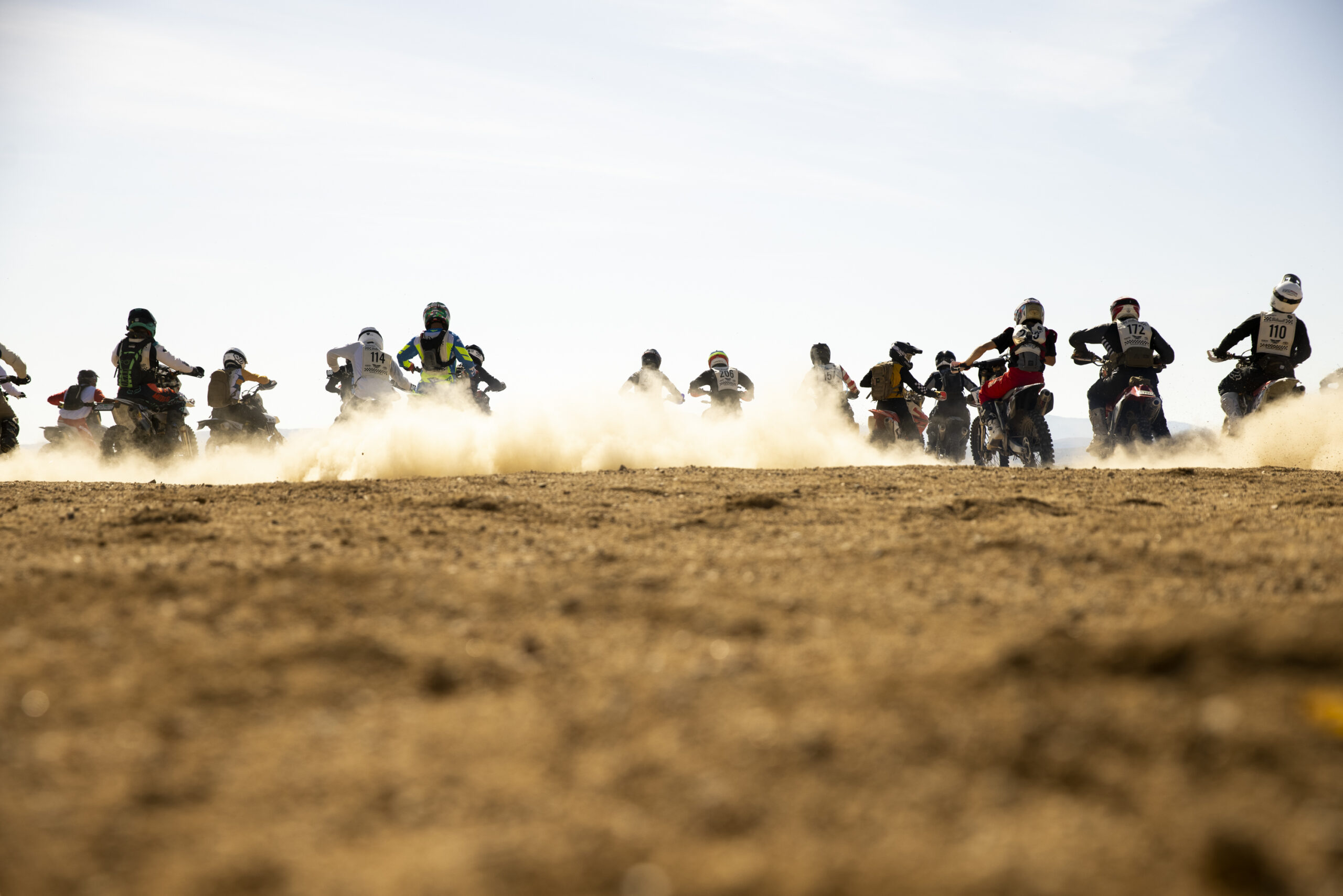 2022 marks the second running of Biltwell 100. The Biltwell 100 is a desert off-road race designed to be fun, challenging, and safe. The 25-mile course is laid out is very Baja like– fast, lightly whooped out and not overly technical. Logistically it’s a breeze with only one pit area at the Start-Finish that is easily accessible with motorhomes and non 4×4 vehicles. It’s a BYOP (Bring Your Own Pit) scenario and the more seasoned racers came correct. Spectating can be done anywhere along the race course as long as you stay 150 feet from it, which makes the race fun as you randomly pass by little cheering squads dispersed across the desert landscape. 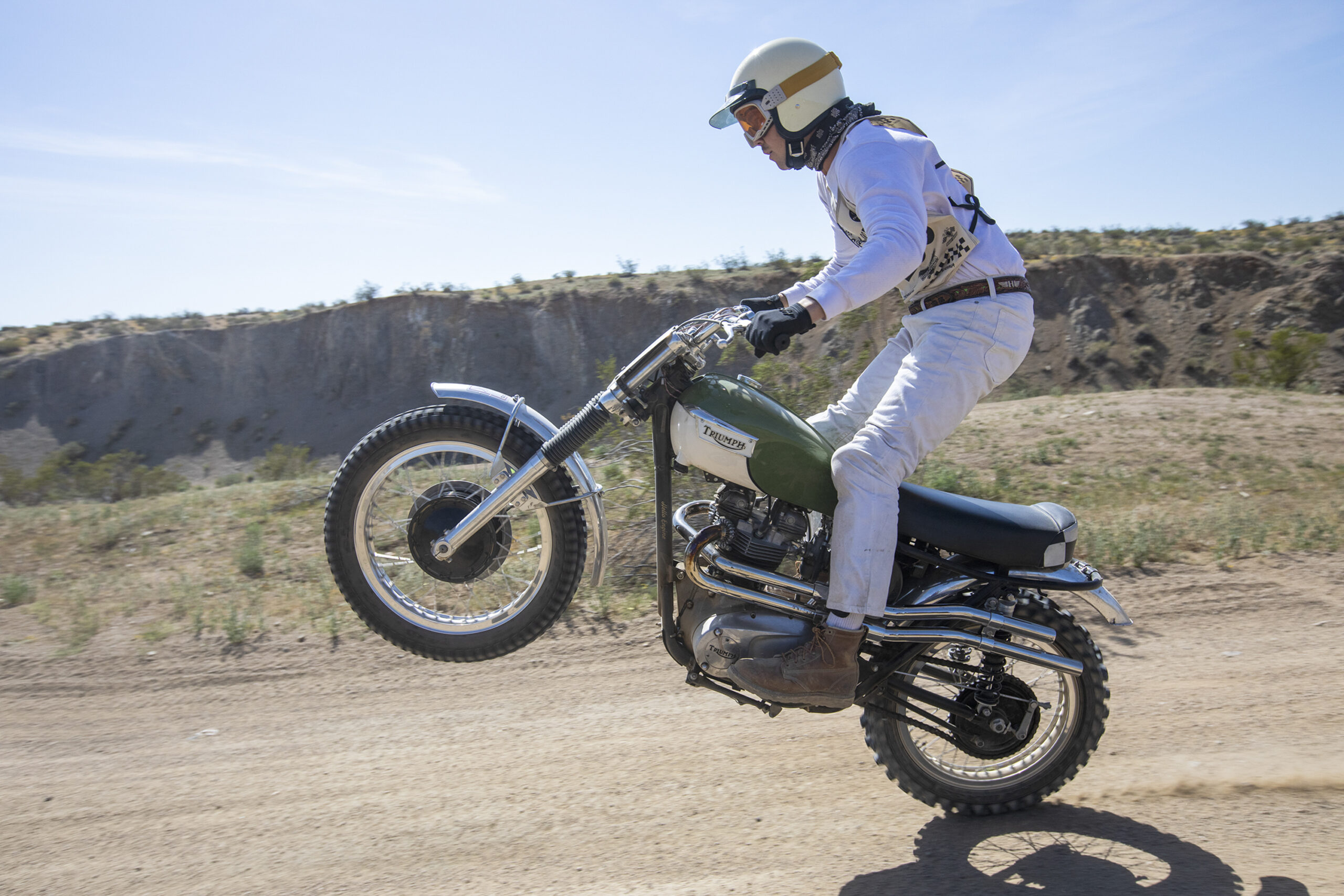 I wanted to race last year but hesitated and the race sold out fast. This year I wasn’t going to miss it so as soon as the race opened up, I jumped on it. Not knowing if the Bullitt OG2 would be up for the challenge, I still went for it. I had aspirations of doing a whole front-end swap before the race but that proved to take more time that I initially thought. Duh! But then the more I thought about it, the more I wanted to run this year with a relatively stock set up. That way once I actually did get around to suspension upgrades, I’d have a baseline to compare against. Sounds logical, right? 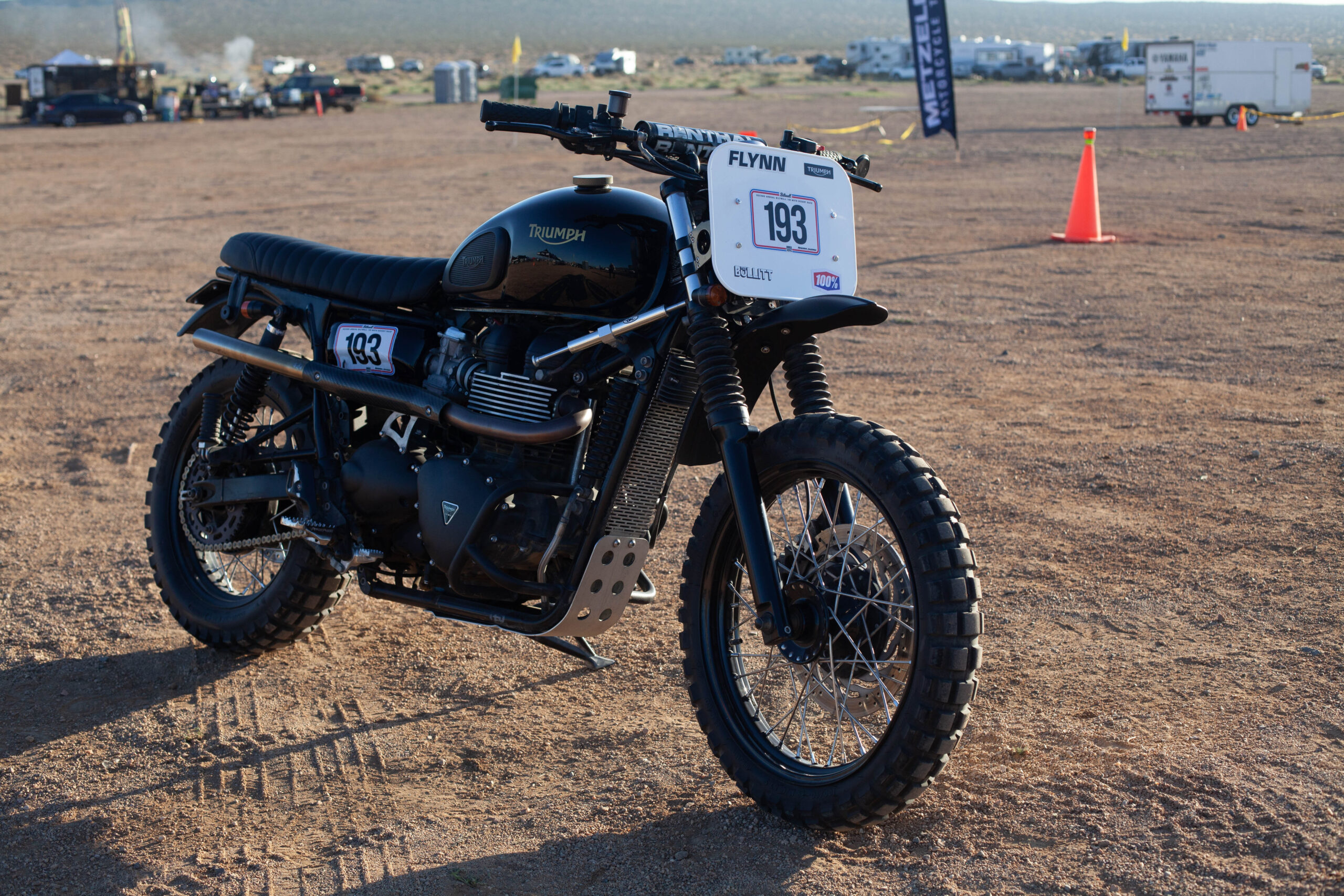 The Bullitt OG2 in its race trim. Photo: Patrick Flynn

Well, little did I know just how difficult managing that beast around for 100 miles. In fact, I’d say my naivety might have been exactly what saved me. Had I known that I would get the proverbial piss and shit beaten out of me, I doubt I would have signed up. This was my first-ever proper motorcycle race. I had ridden motocross as kid, and have gone on trail rides as an adult…but on modern dirt bikes or ADV bikes. Having had my Triumph Scrambler just a bit over a year, I had only done a few local OHV trails…never once for speed. Again, my ignorance was bliss. 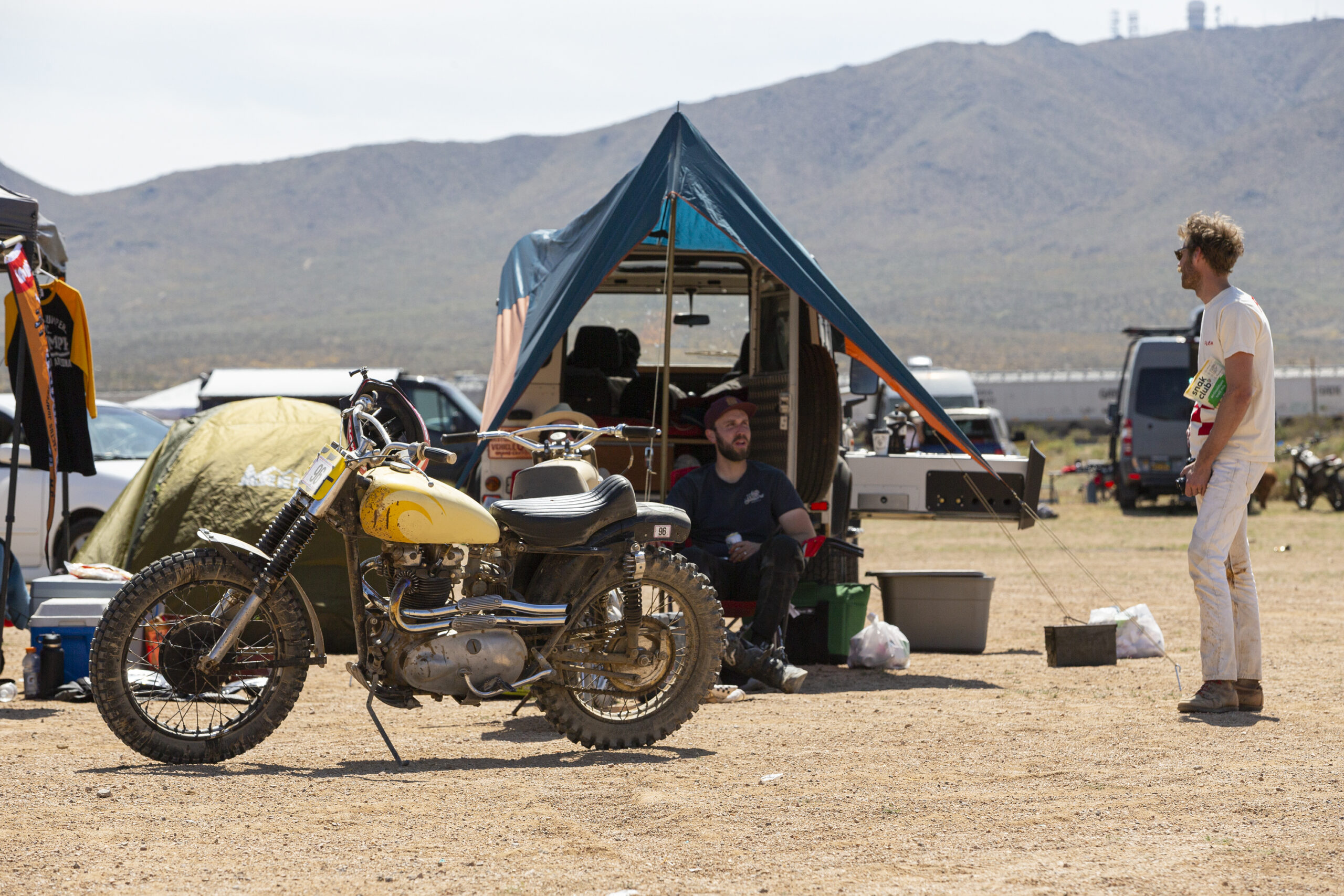 Even before the race started, my lack of off-road experience shone through. As the first rows were getting released, I realized my tire pressure was still at street levels. In a mad dash, I ran around looking for buddies who could lend me a gauge. I ran into Nate from BA Moto who lent me his. Now in a mild panic I started dropping pressure as fast as I could. In my haste, I didn’t realize it was a gauge that you need to release pressure on each measurement and I managed to drop the front to 9 PSI with no time to refill. Shit! Let’s see how this goes. 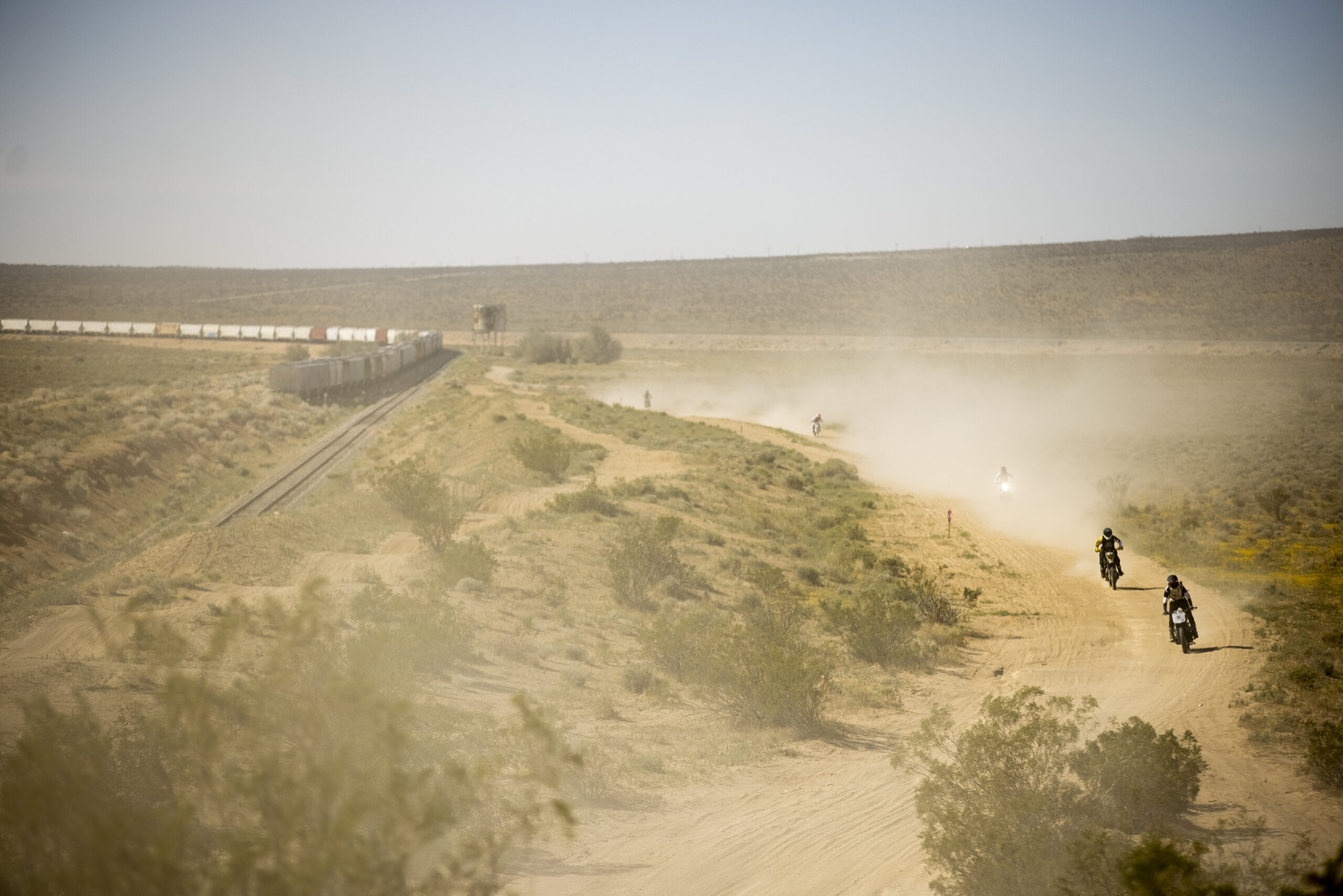 The Scrambler novice class (my class) was Row 7 so by the time it was our turn, there was already a decent amount of dust in the air. It’s a rubber-band start, and we were all fighting for the hole shot. I kept telling myself to take the first lap easy, get to know the course and then I’d turn it up for the other laps. Well, anyone who’s lined up at the start of a race knows that’s much easier said than done! I just wanted to get in front of the dust, and seeing my competitors ripping off the line, I followed suit! 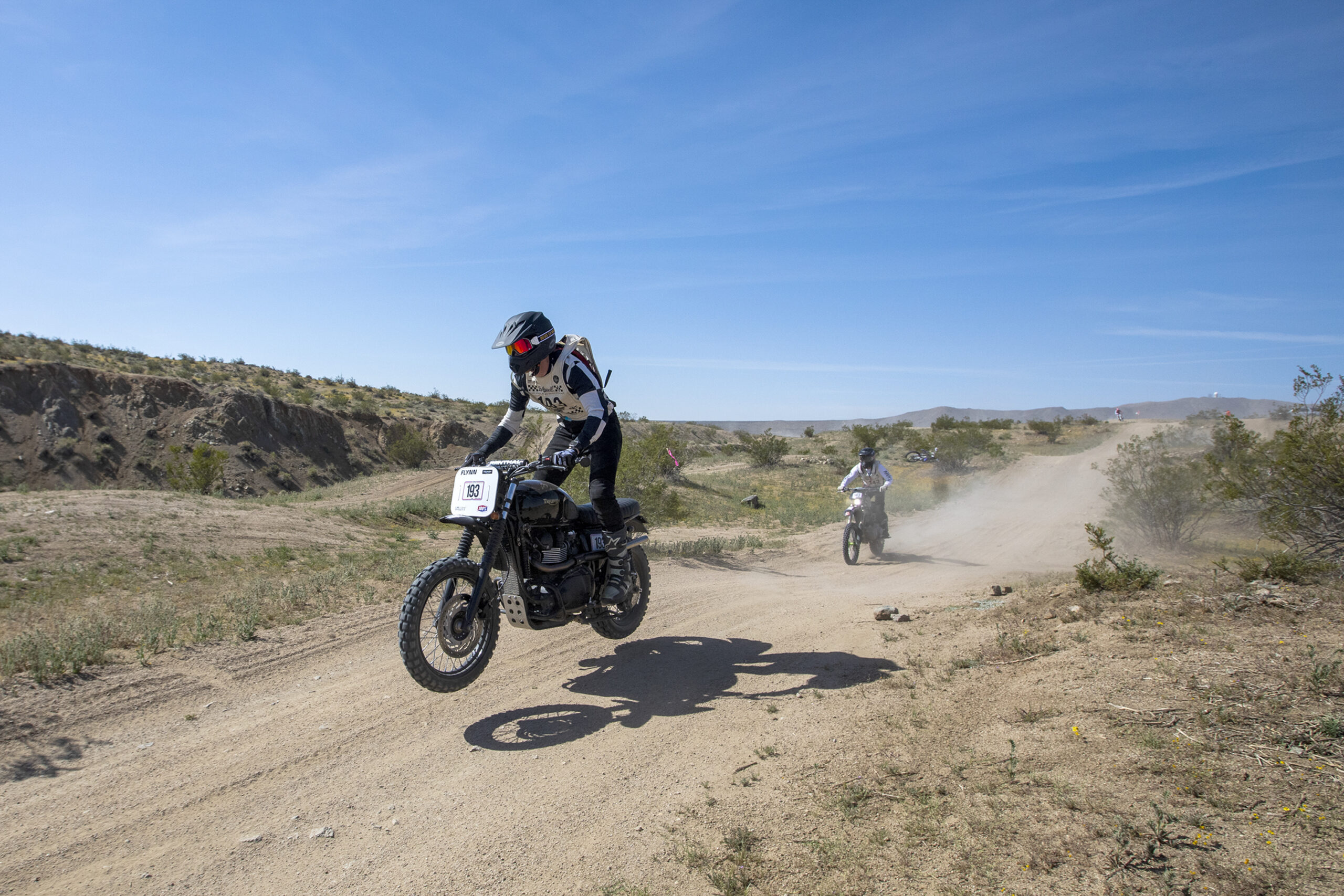 Down but not out

All was going well for about 6 miles. 6-freaking-miles and I got greedy. I crested a hill and didn’t realize it was a combo of rock and sand and managed to eject myself over the bars. After taking flight and picking myself back up I inspected the bike. I lost the toe peg off my shifter and completely ripped off my British Customs direct mount reservoir for my front brake. I totally thought my race was over but decided I’d at least limp it home. 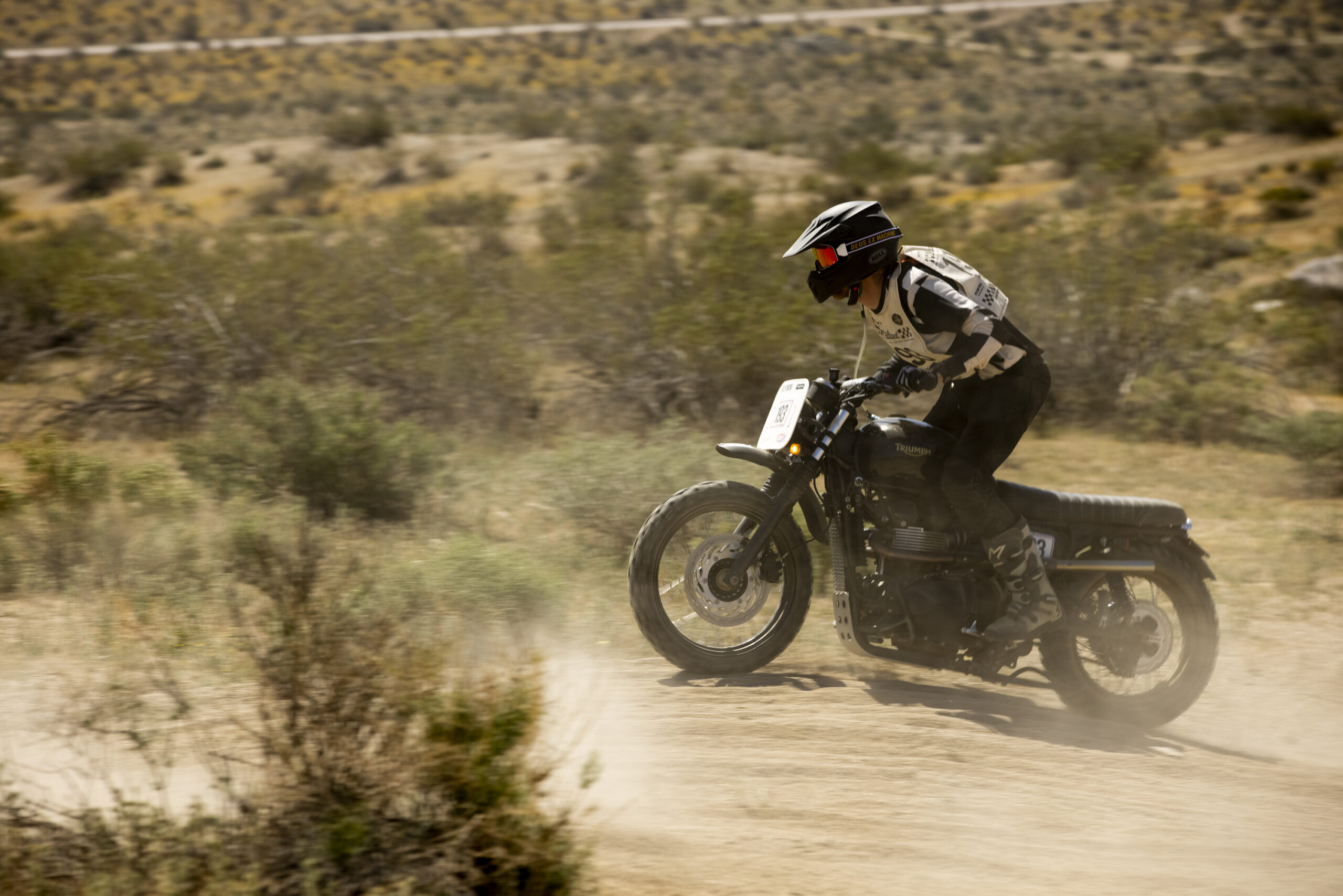 OK, maybe out this time?

There were a few other wash outs and tip overs on the back half of lap one but I made it through and decided to not pit and force myself back out for lap 2. About half way through lap two I ran through a road crossing that goes from hard pack trails to sandy wash and back really quickly. Once again I ejected myself but this time landed on my head and really rung my bell. I was still in race traffic so I popped up, saw stars, and immediately toppled back over. I think this is what doctors would call a mild concussion. 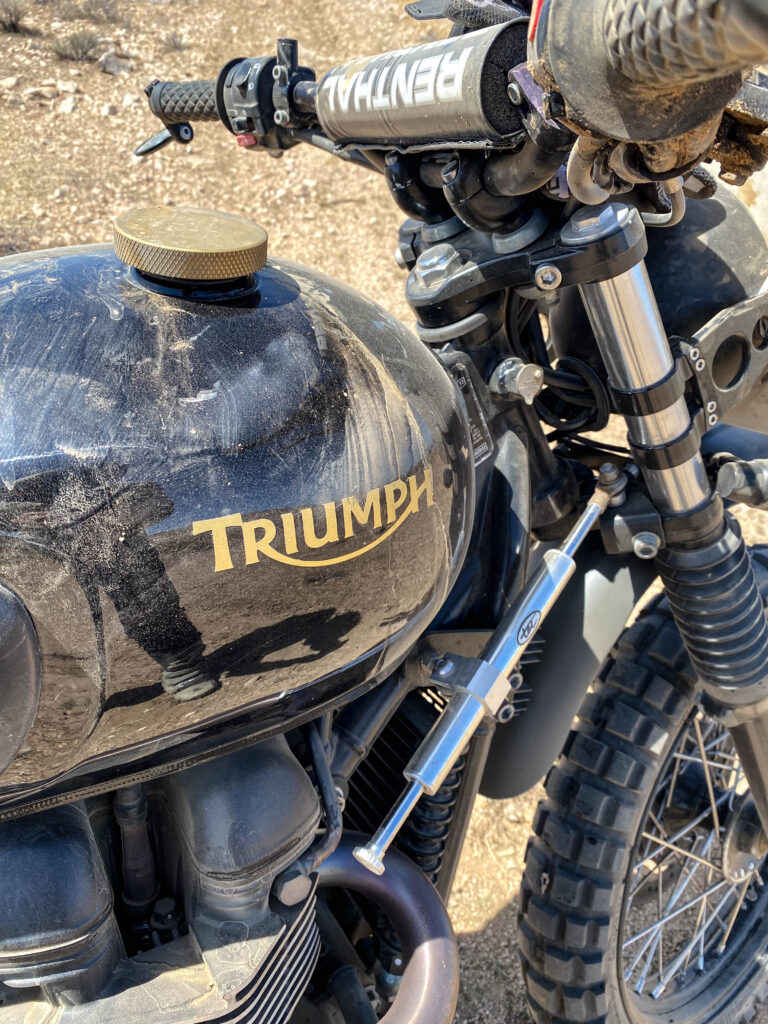 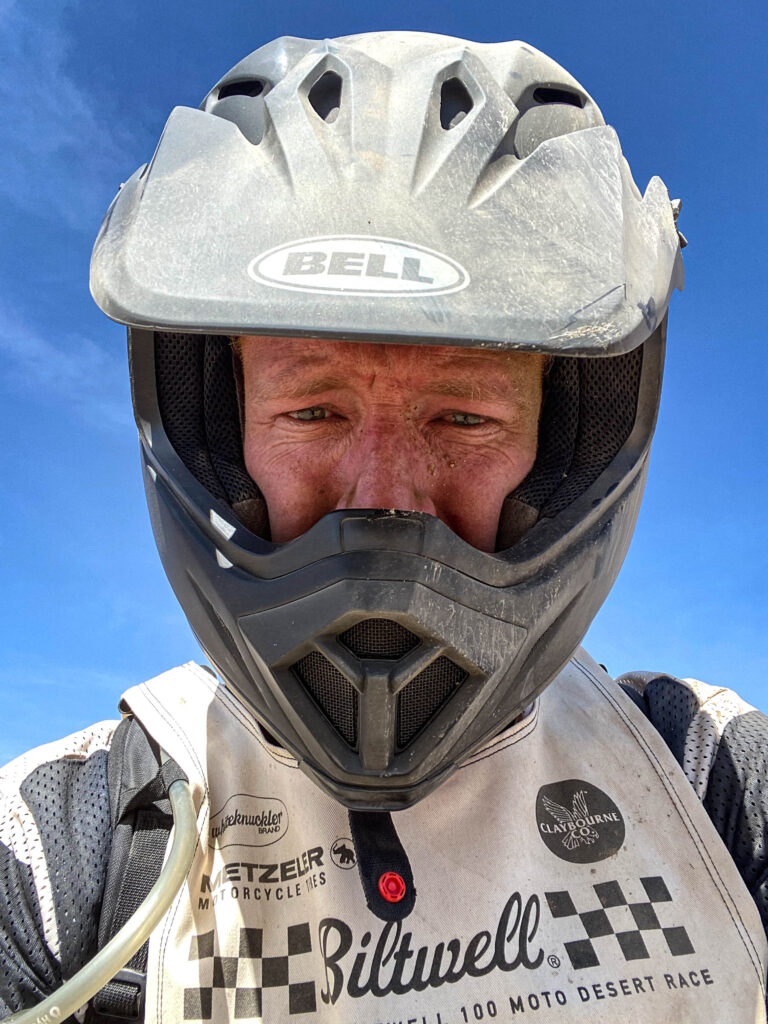 This time I told myself the race was over. My bars were completely tweaked, my head was spinning, my shifter was gone, my front brake was hardly functioning, and I thought there was no getting back to the pits under my own power. I took a few moments, got the dirt out of my eyes and helmet…and decided to press on. About half way through each 25 mile lap there was a check point where I pulled in, the dudes straightened my bars and sent me on my way. I think in the back of my head I was hoping the techs would tell me to quit, or that my bike was too banged up, but I guess that’s not how desert racing works. 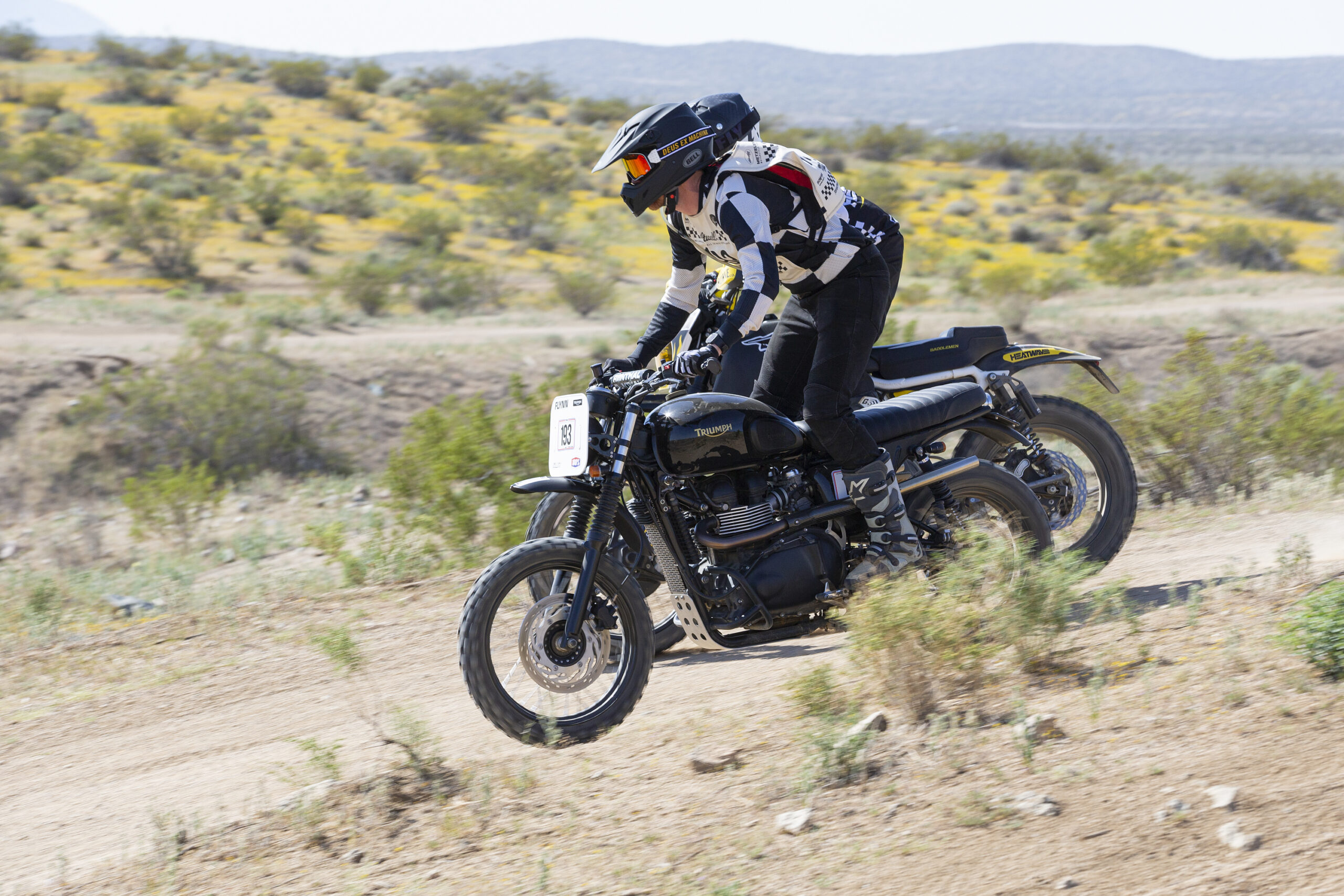 A couple of hooligans in the desert. Photo: Keith Mulligan

I somehow rolled back into the pits this time and remembered that my damn tire was low as shit. My buds were all out racing still so I made new friends with someone with a compressor, filled up my tire, added some gas, and recomposed myself. “If I can just finish 75 miles, that’d be respectable,” I kept telling myself. Not really sure what compelled me to push on with the beat up bike, but I knew I’d be proud of myself if I could get more than half of the race distance under my belt. I was about 20 miles in on lap 3, feeling good and ripping through some sandy whoops, then in an instant things took a turn for the worse. The bike got away from me and we both got air, did a complete 180, and then the fat pig landed on top of me. The bike’s lever landed on my right palm and the pressure opened up a nice little wound. My hand was shaking, the bike was backwards and buried in the sand. THIS time, I knew I was done. 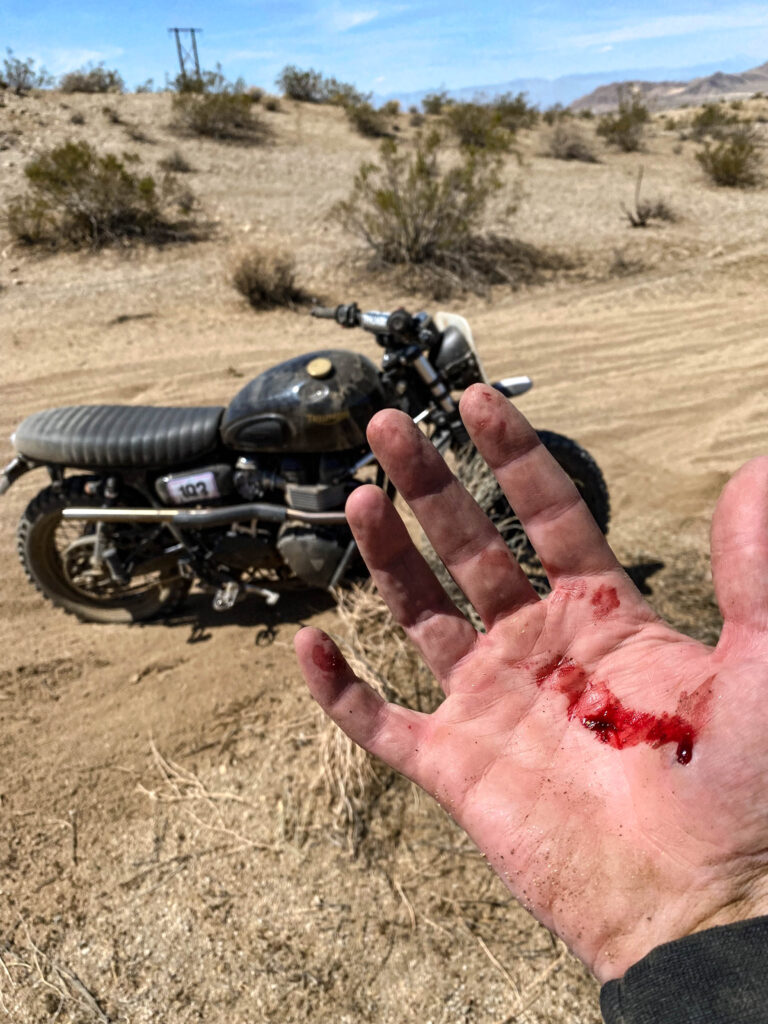 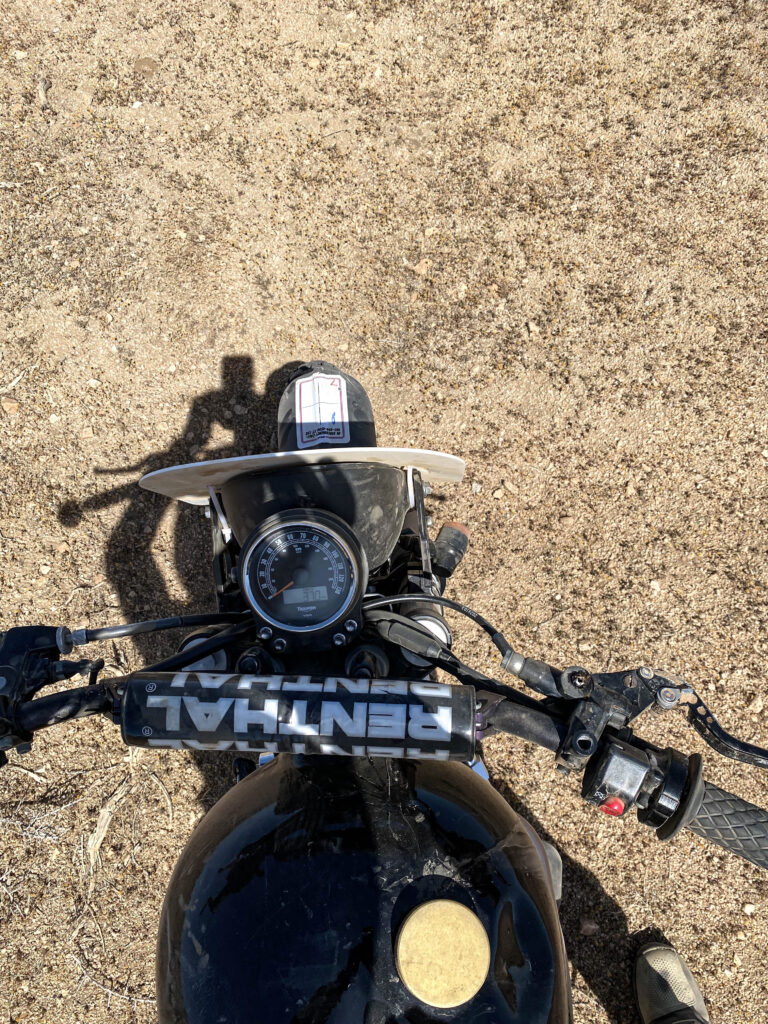 Once again, I collected myself, and somehow managed to get back on the bike and limp back to the pits. I arrived back relieved that my race was over (or so I thought) and was still pleased with the outcome. When I pulled back in, all of my buds were finished and back in their street clothes. The Biltwell 100 had live race times and one of my buds pulled up the standings. “You’ve got a chance to podium,” he says, “all you have to do is finish!” Come to find out that was a lie. Little did I know, I was sitting in fourth with a decent gap to make up. My crew didn’t even let me take off my helmet. Everyone jumped on me like a F1 pit crew. They were refilling my hydro-pack, pouring cold water down my back, slamming me with Advil, RedBull, salve, and everything else you can imagine. YOU CAN DO THIS, they all said. Well shit…I guess I need to soldier on and go for broke. Come to find out later, they joked they had sent me out to “podium or die,” and that’s just what I did.

Then I saw @fatrickplynn come in on his third lap after multiple crashes- missing front brake reservoir, shifter lever peg, generally jacked up bike and what looked like broken thumbs etc… @steve_kamrad and his crew put some kind of magic salve on his blistered hands, duct tape over the front brake, water down the back, hand-fed RedBull and Advil and most importantly encouragement to finish his final lap- he collected himself and made podium in third! That was great.🏁 – Alex Earle 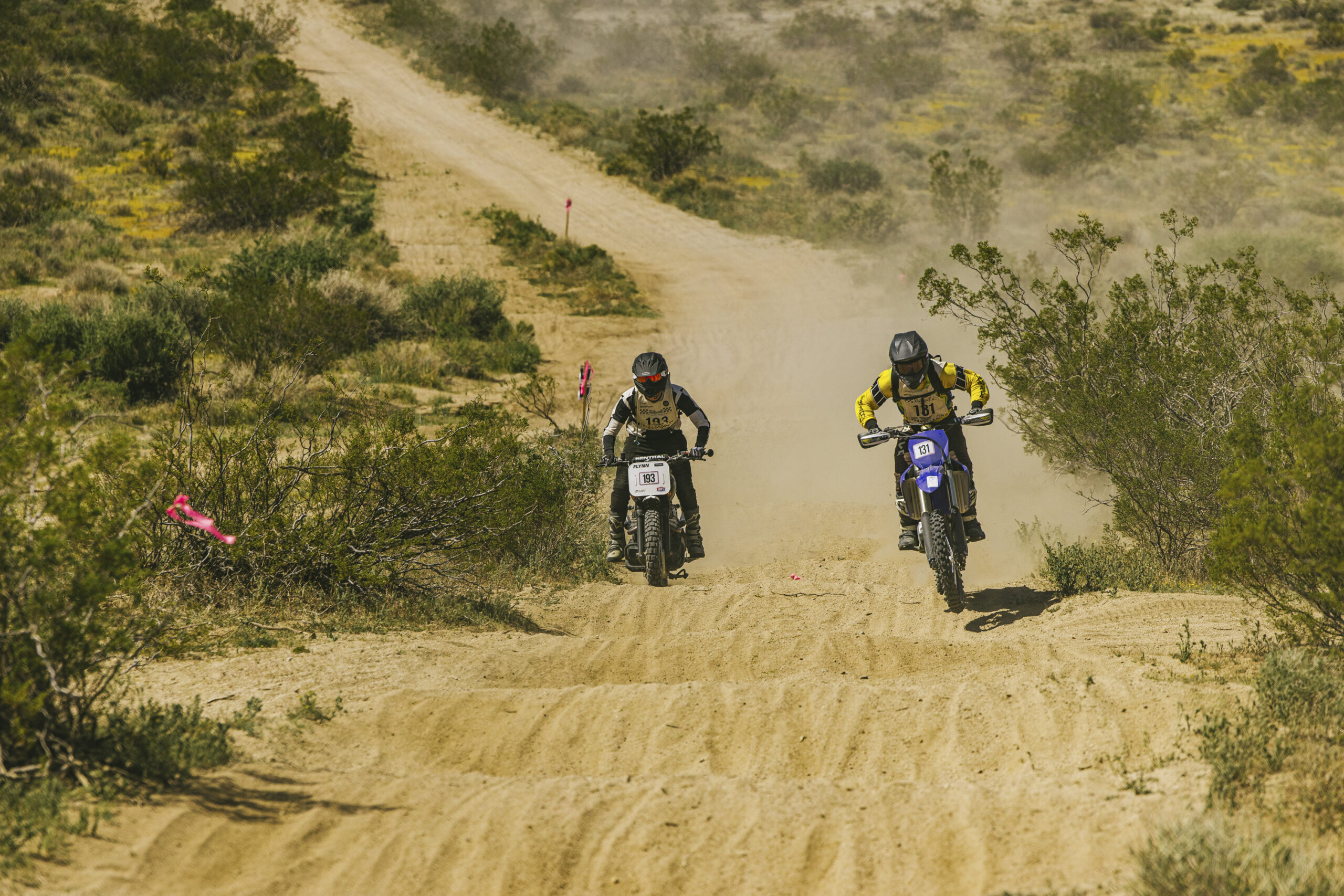 Nothing like whoops on a Triumph. Photo: Gregg Boydston

I was so banged up and tired I knew I couldn’t pick that damn bike up one more time. I was talking out loud to myself in my helmet the whole time. “Take your time. Slow is fast. Don’t crash.” Whatever I could say to motivate myself and keep me moving forward. Each mile marker I would count down. “20 miles to go!”…”19 miles to go!” All I wanted to do was finish…that is until I saw a red bike up ahead. THE red Triumph with the dirt bike front end. The only other modern Triumph in the race. Fuck going slow, I needed to beat this guy! Something turned on in my mind and I cranked it back up. I had to beat him. Throwing caution to the wind, I pinned it. The last 10-ish miles of the race were probably my fastest. It was mostly all deep sandy whoops and I just leaned back and held on. Somehow, I stayed upright, and made it home. I took third. 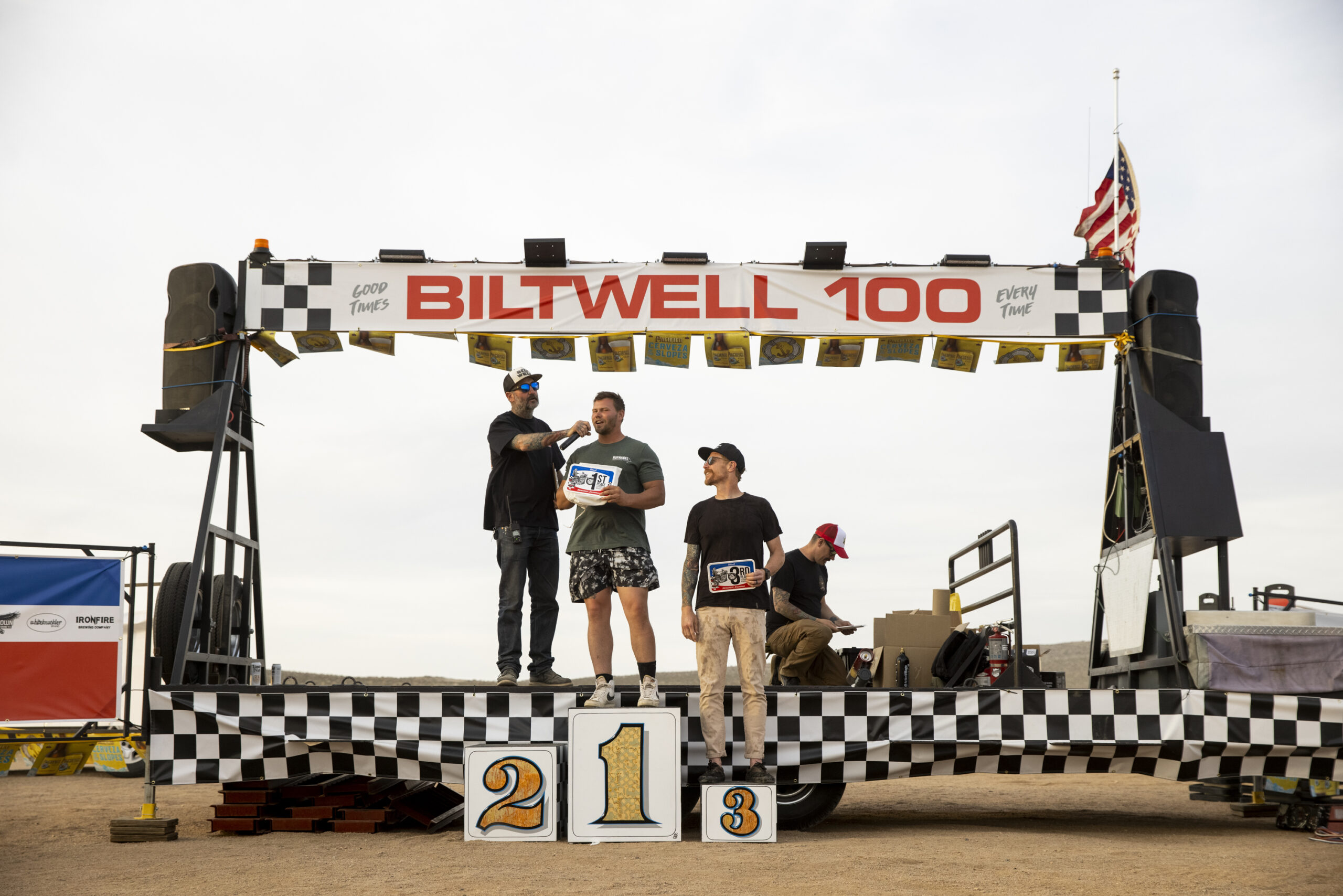 I was welcomed back to the pits in amazing fashion. It was something I’ll never forget. As I pulled in my friends showered me in beer, hooting and hollering. They made me feel like I had just won the MotoGP championship. I was whooped, I was beaten, and I was happier than I’ve been in a long time. I’m already addicted to the feeling and need another hit soon.

Reflecting back on the experience, the obstacles, and the anxiety of racing in general, my only regret is that I took this long to get into it. To the Biltwell organizers, to my unofficial pit crew (Nathon Verdugo, Steve Kamrad, Bryan Grimes, Alex Earle, Kurt Kamrad, Barbara Moreland, Susan Posner) a heartfelt thank you. I will never forget this day, and can’t wait to come back for more. 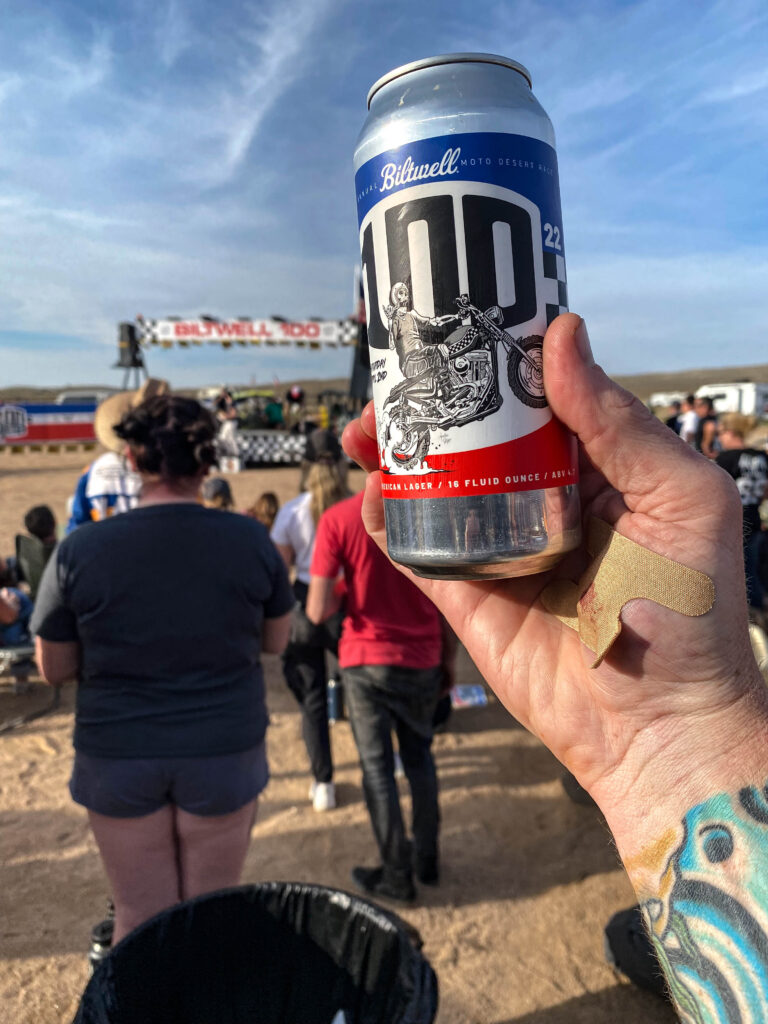 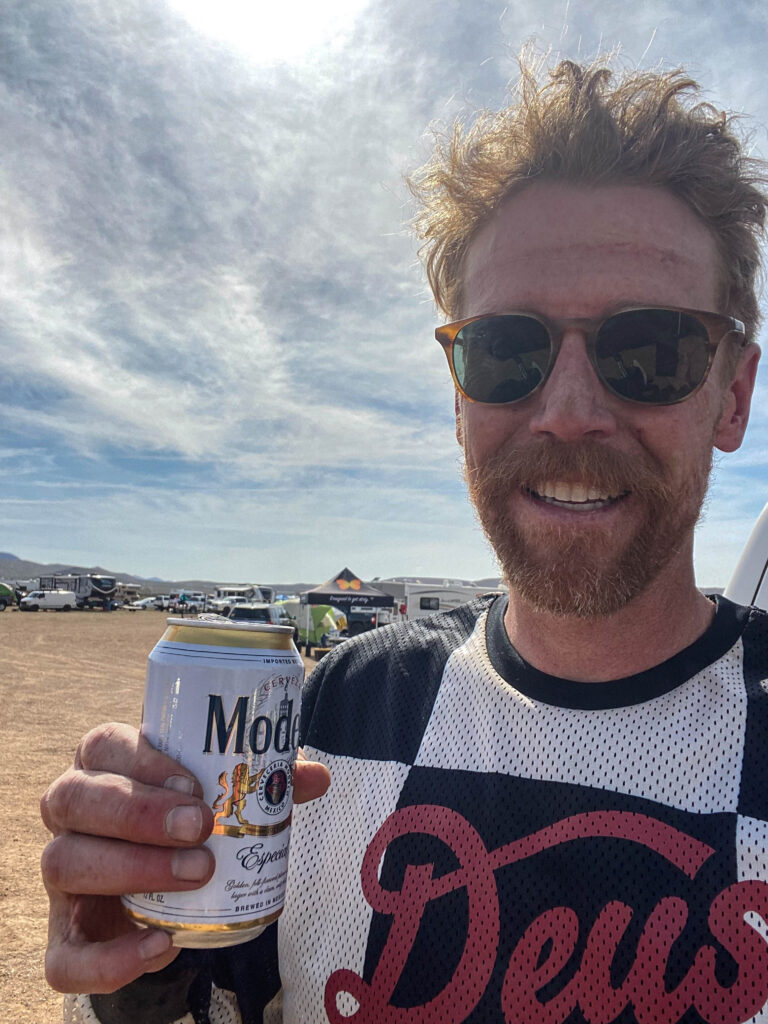 Special thanks to my buds at British Customs for the support along the way.