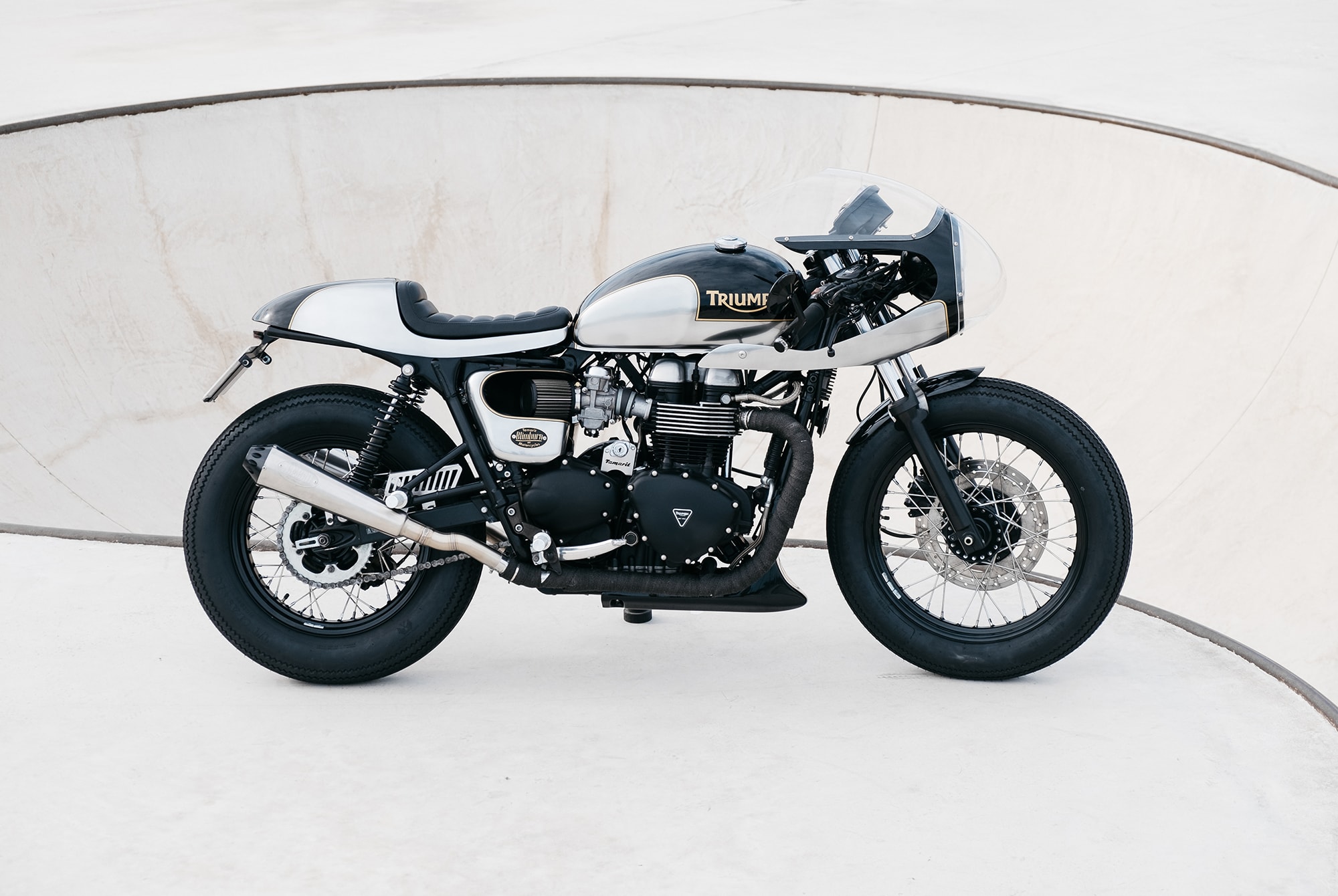 Who you calling a conehead?

Words and photos by Tamarit

One of the several uses that we could make off a hypothetical time machine would be probably to travel back in time in order to tell ourselves about future achievements so could we get pumped up and inspired. When you have been building motorcycles for many years and your finished and scheduled project list spans into more half the hundred, it would be always curious to imagine the face gestured if someone would state how far we would get, or the kind of motorcycles would came out from our garage over the time. 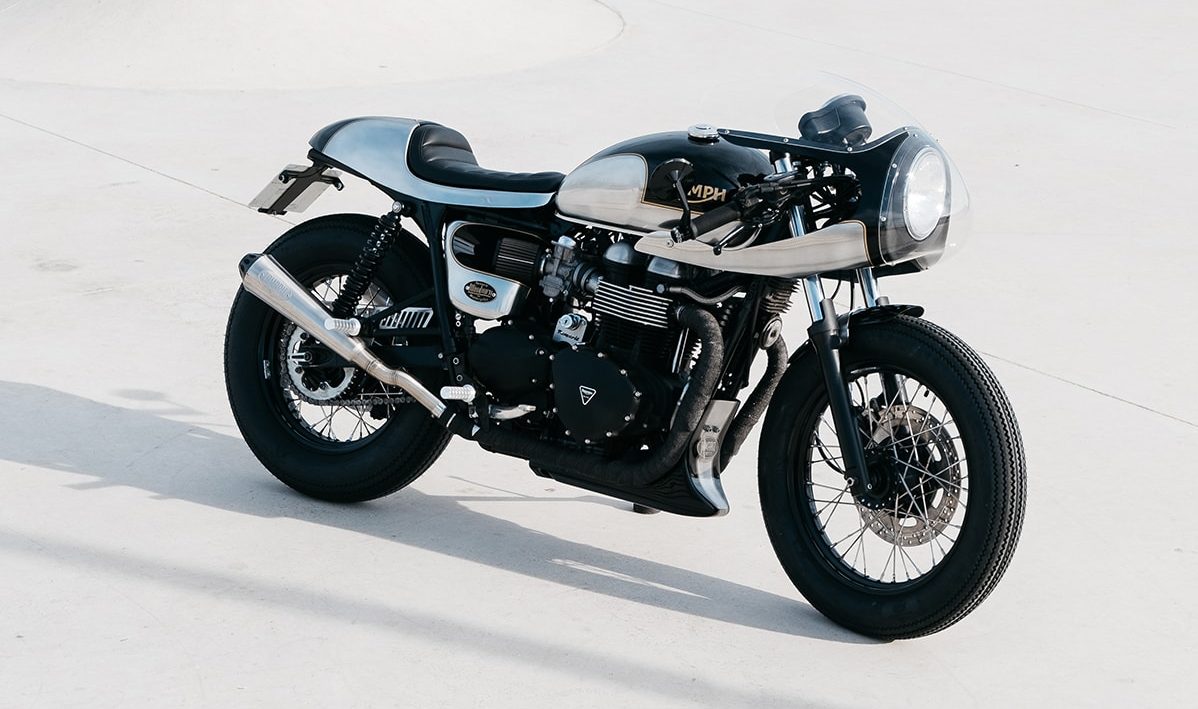 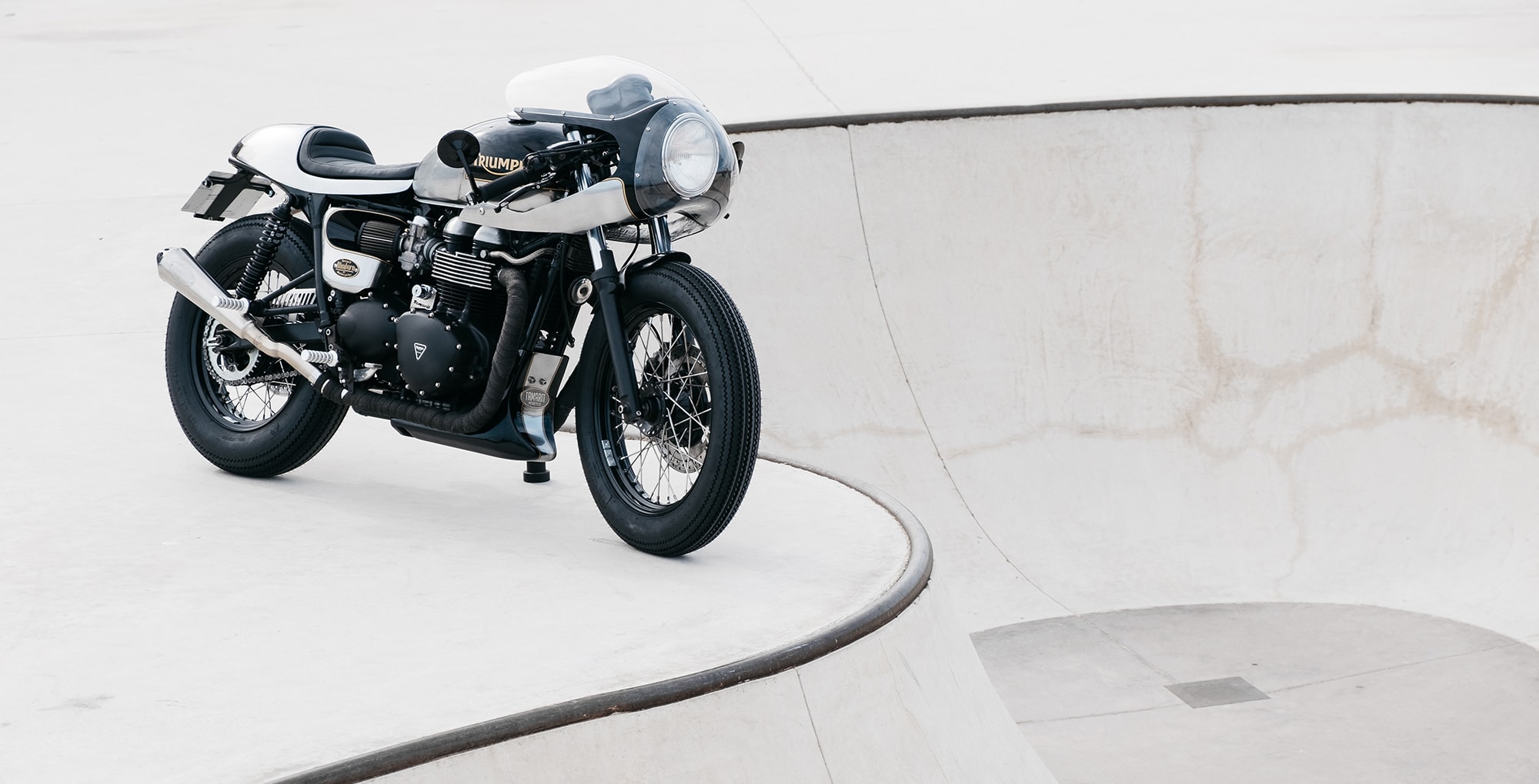 Probably we would not believe a word, or maybe we would get even more excited and raise our expectations. Time paradox aside, BLIMBURN is a project that certainly collects several old wishes that we wanted to include on a project. Same way as motorcycles as RONIN or RUBY were bikes hard to imagine even some time prior to its conception, this showroom café racer arrived to the garage just as a healing potion, achieving many aesthetic milestones we had in mind as objectives. Sometimes we enter the office and say out loud how lucky we are! 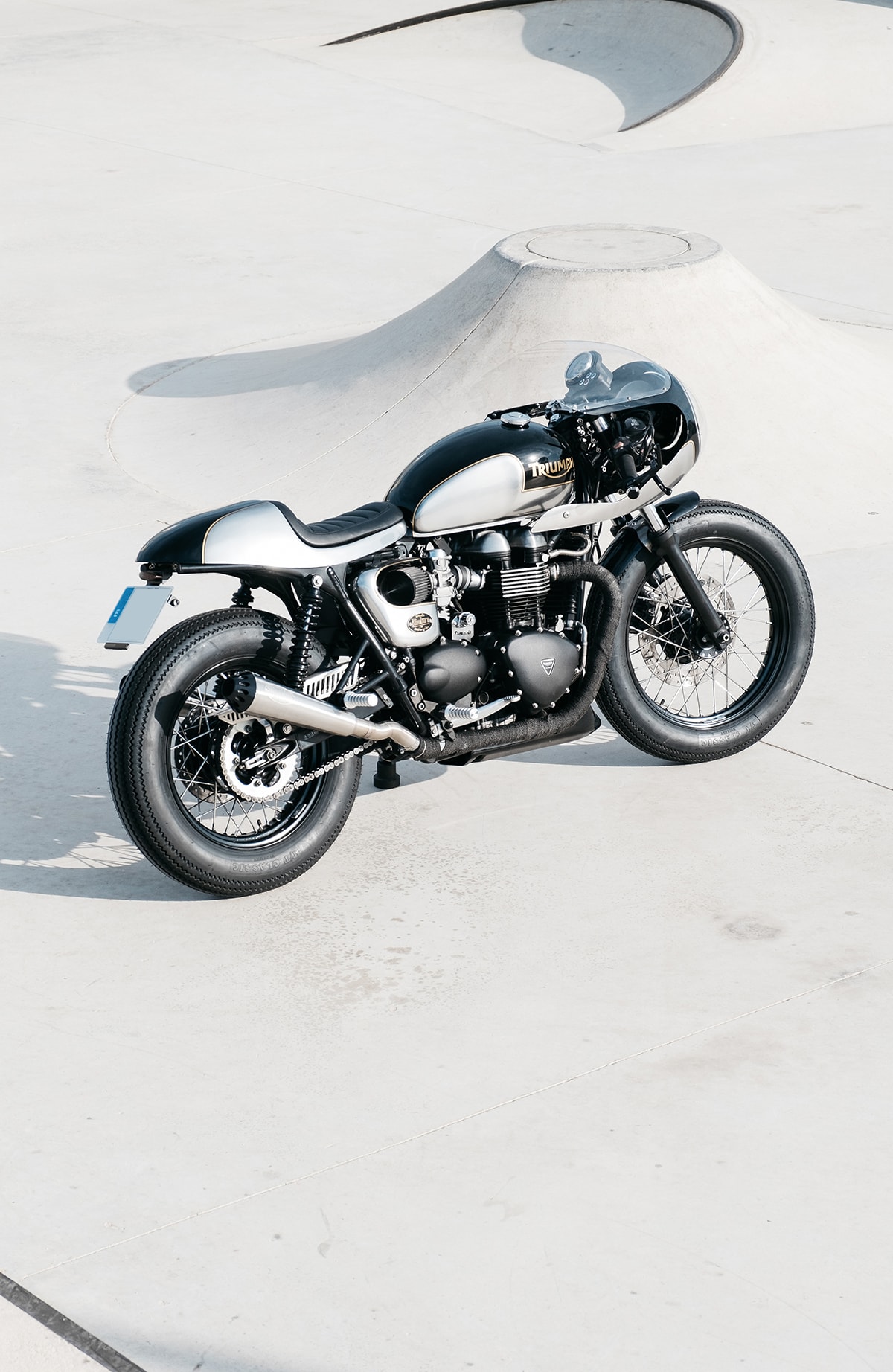 When the month of February began, a man called Sergio contacted us, someone who had a Bonneville EFI model from the old air cooled generation. Sergio wanted to transform its Bonneville and coat it literally in a café racer classic style that Tamarit Motorcycles could provide. He liked it very much our former project called THE SON, but only taking it as an starting point, since he wanted it to take the project beyond and to include features and elements that were installed in more recent projects. 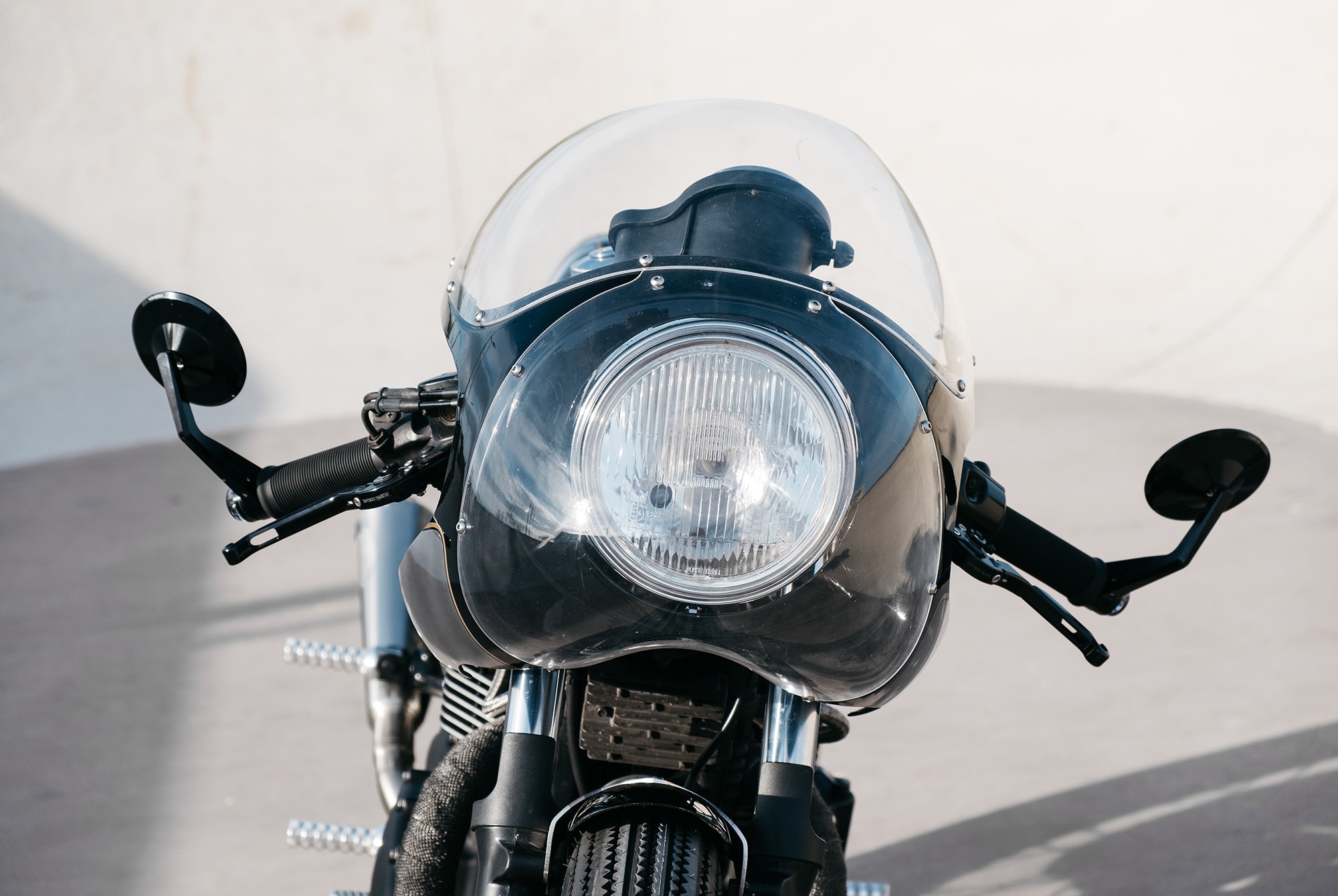 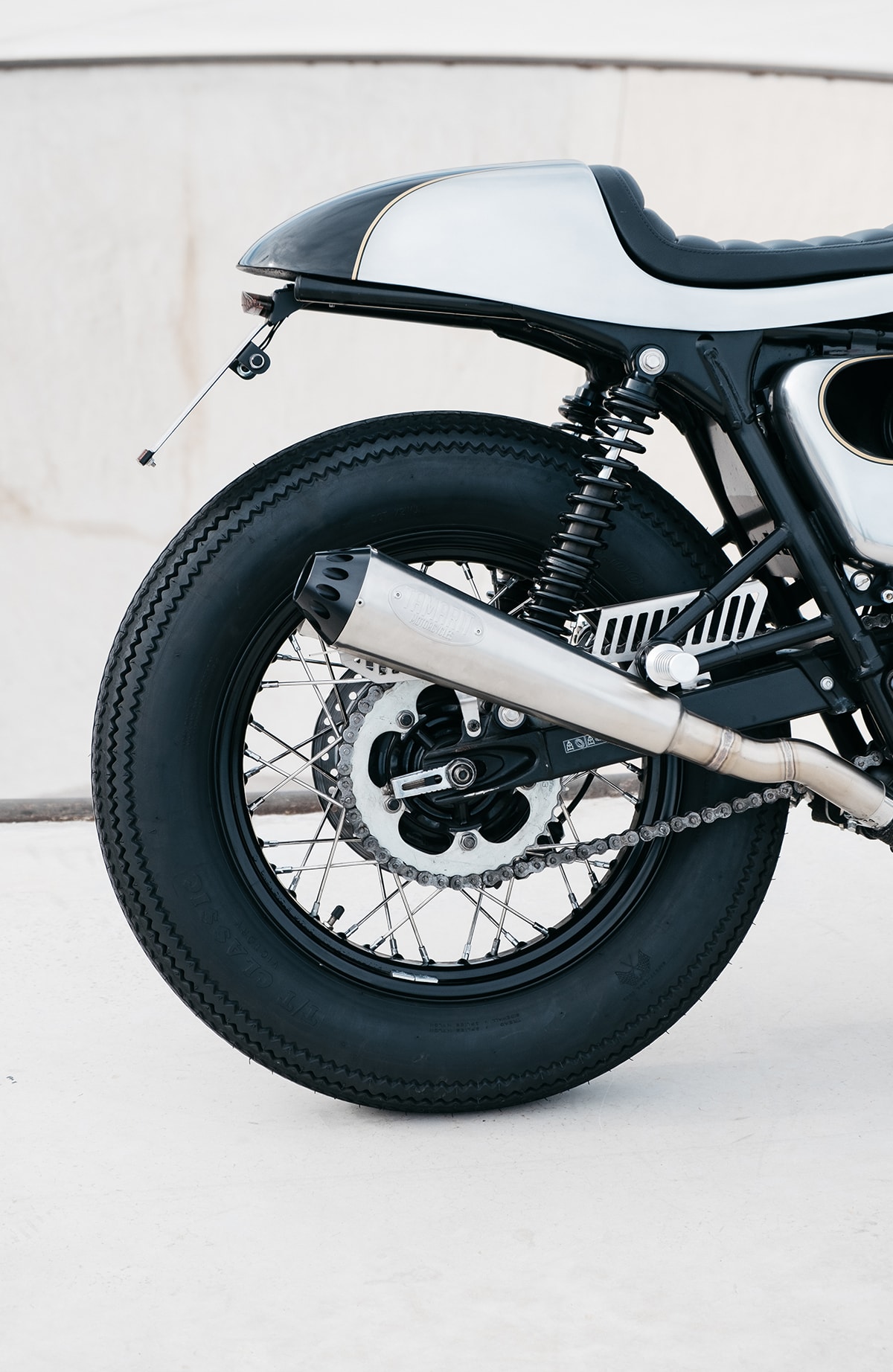 That boost and excitement that Sergio came with to make the project with us made us think about the long-awaited project that would become the ultimate Café Racer build. Therefore, the project was being shaped little by little just by adding parts and accessories until Blimburn got to be one of the finest and most complete works we’ve done so far. Sergio wanted to add some of the parts that were being included on the upcoming and current projects during that time: the side covers from this project, the wheels from the other one, that nose fairing we saw on a picture… etc. Tamarit’s norms toss a coin anytime we want to make an hybrid from various ideas, sometimes we get heads, sometimes tails. 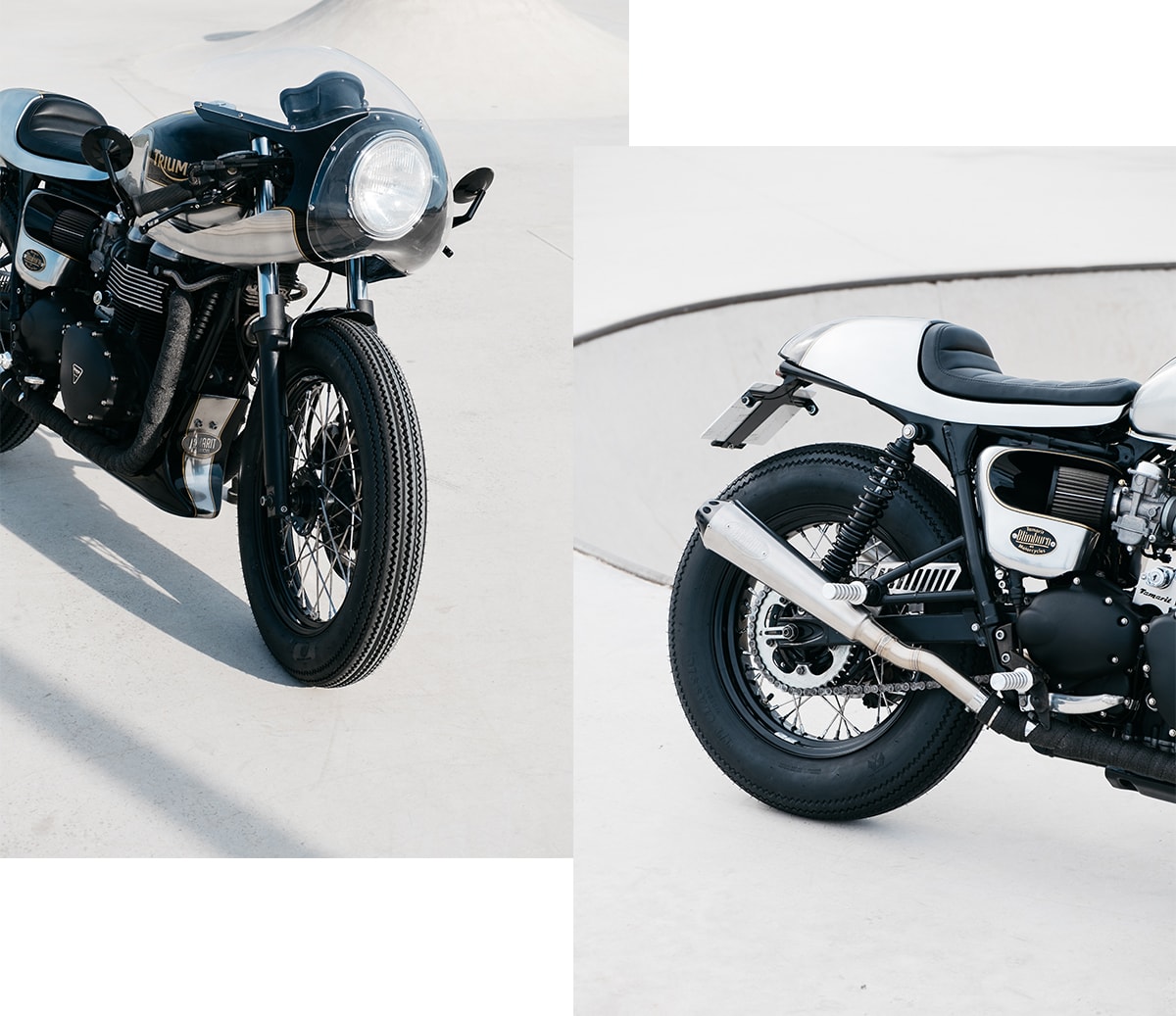 Let’s begin from tail to nose, basically almost every Café Racer project based on an air cooled Triumph has to include our racing Café Racer cowl “Jarama”, which blended with the eliminator kit that gets rid of the bulky rear fender provides the usual look of the Tamarit Motorcycles’ Café Racer project. To the regular casted Boludos exhausts, on the rear part is added as well the stainless steel chain cover with the new design. As a reference for the recent projects such as Appalachia and Ruby, Sergio wanted to include as well the open side covers for old generation air cooled motorcycles, which provide a stunning look on the sides of the motorcycle. 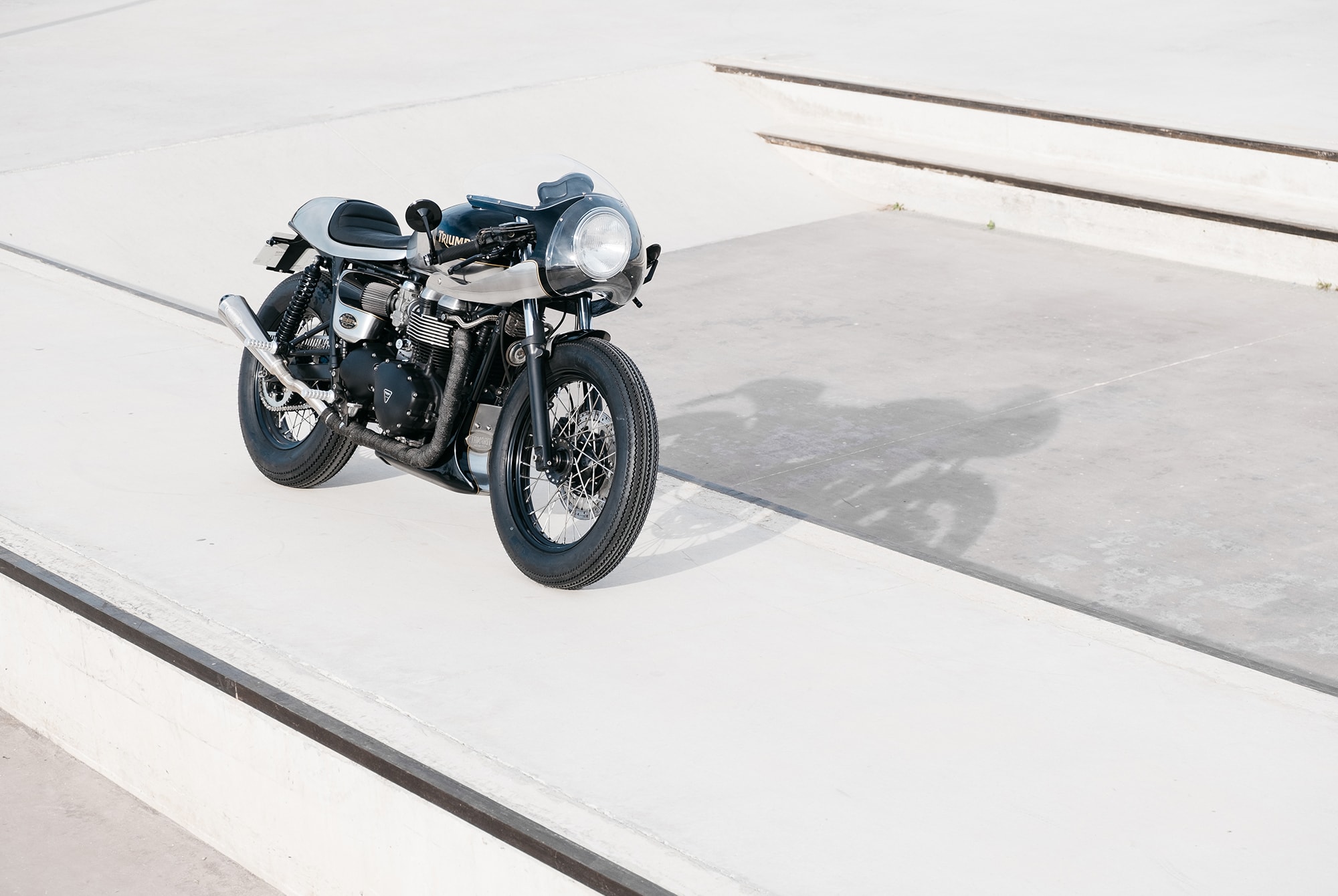 Besides the regular Motogadget devices like the grip turning signals, it’s worth mentioning the Blimburn nose fairing, never set on a Tamarit Motorcycles before, something that it’s somehow pleasant to write on this stories, which sooner or later, due it’s amount, would end up telling the same at some fragments anyway. This nose fairing made by AVON was a part that we wanted to work with for a long time at one of our projects since we saw it installed at a breathtaking Thruxton from a french gentleman who is a good client of us. Finally, it was Sergio the chosen one that finally decided to put this part in one of out projects, part shaped as a bullet which result and influence on aesthetics has no need for words. 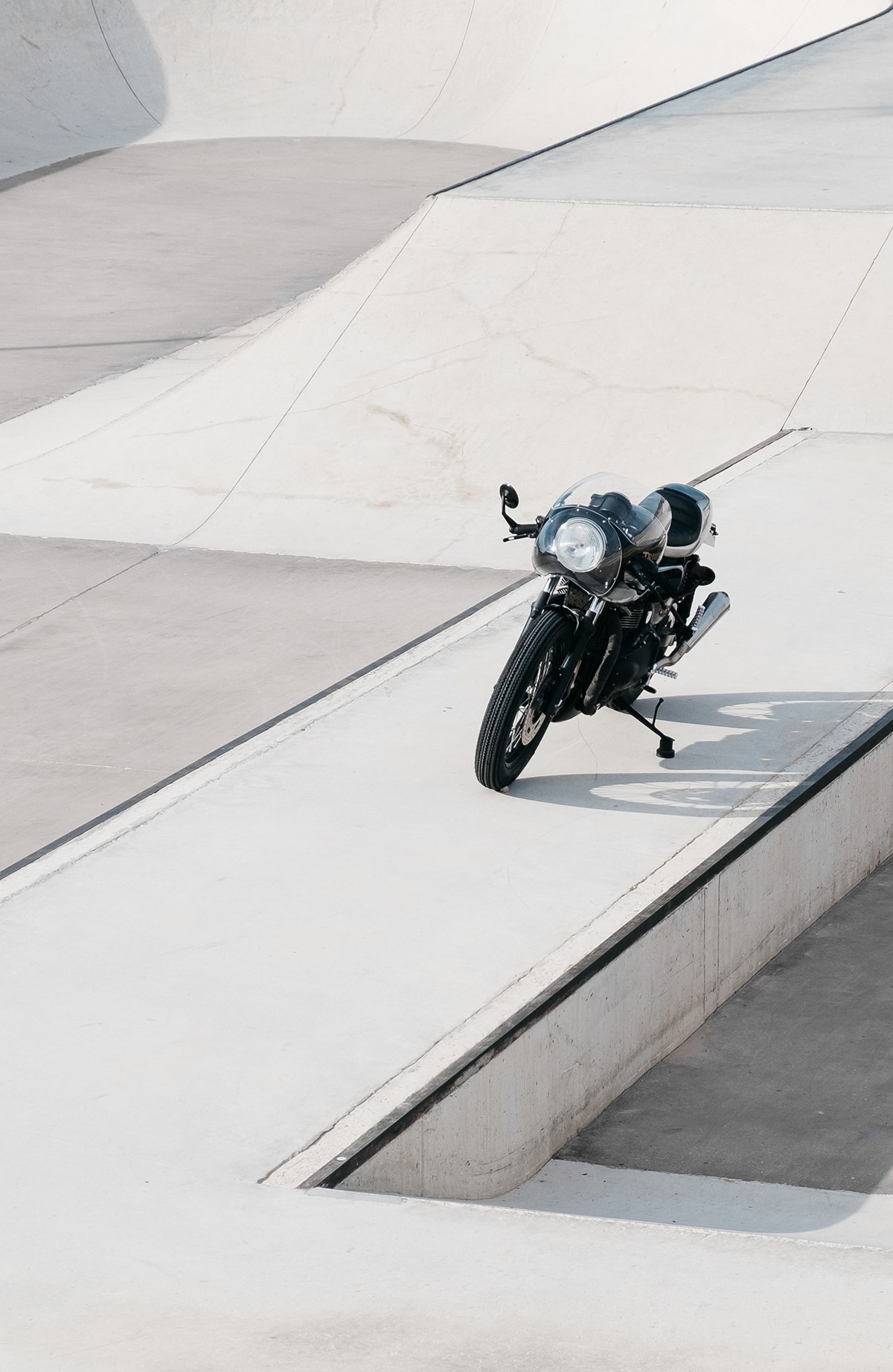 The classic look of the bike would be completed by an element also very frequent on the projects from this new era of Tamarit, the pure classic vintage style Victory tires, which turned out to be a very nice feature in projects such as RUBY or the one to be released soon, the almighty SPEEDSTER. These tires also were part of the Blimburn project, which as the previously mentioned, has became one of our finest projects so far. Regarding the paintwork, Sergio wanted, according with the rest of the motorcycles, a pure classic color and design. It’s true that Blimburn has been influenced regarding the parts by many other motorcycles which were made recently and The Son for the concept but, we should go back to our beloved COMEBACK SPECIAL to finally find the main reference used for paint and design, which resulted in a beautiful chrome color mixed with gloss black, which would be blended with a golden line which would run along every fiberglass part from cowl to nose fairing as well as the belly pan. 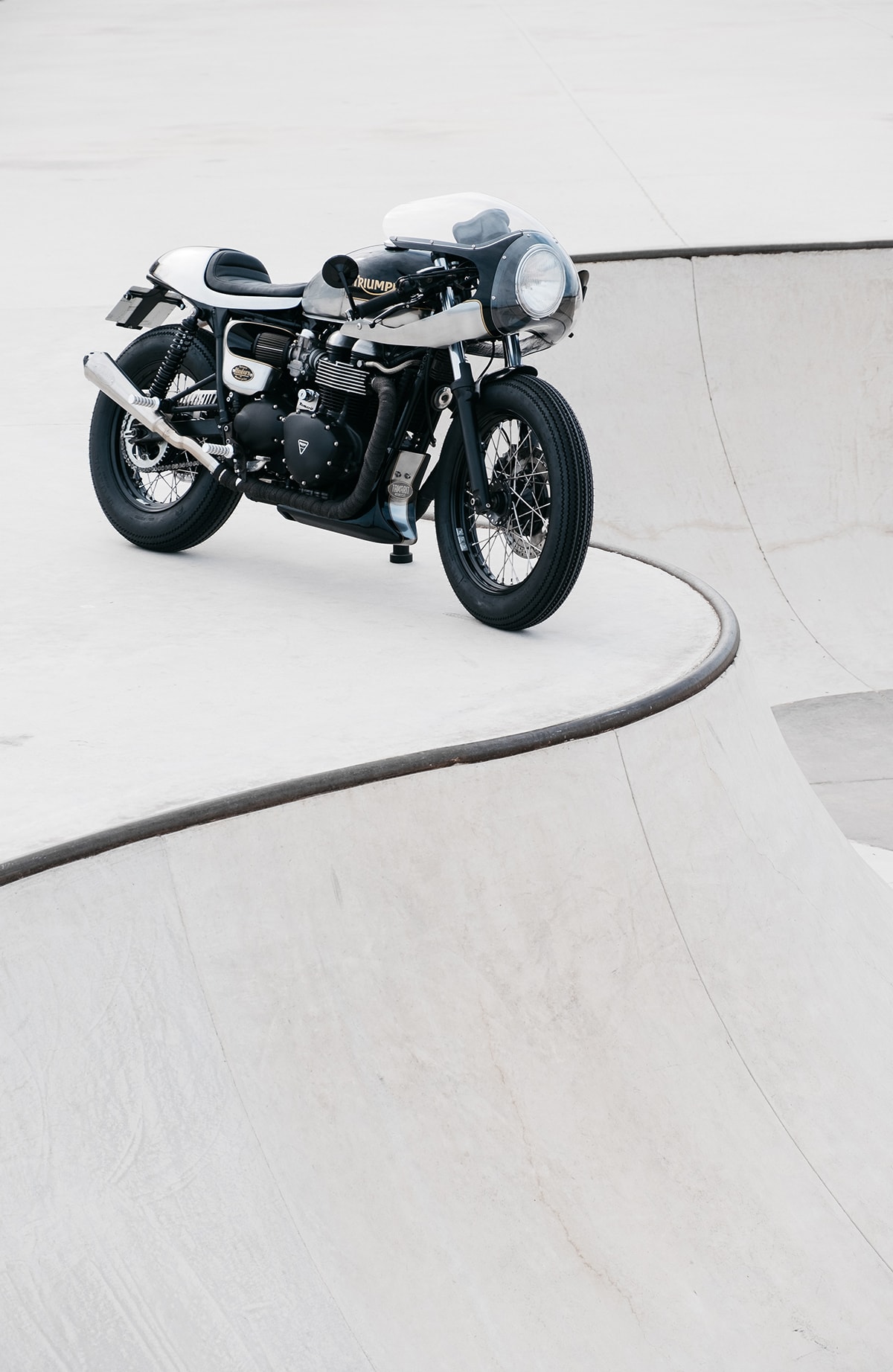 Another Triumph bike project made by Tamarit, on the verge of releasing the long awaited motorcycle number 50, which would open a new era full of sensation and surprises as the ones that provided this Blimburn. Thank you so much Sergio for giving us the chance to work together. 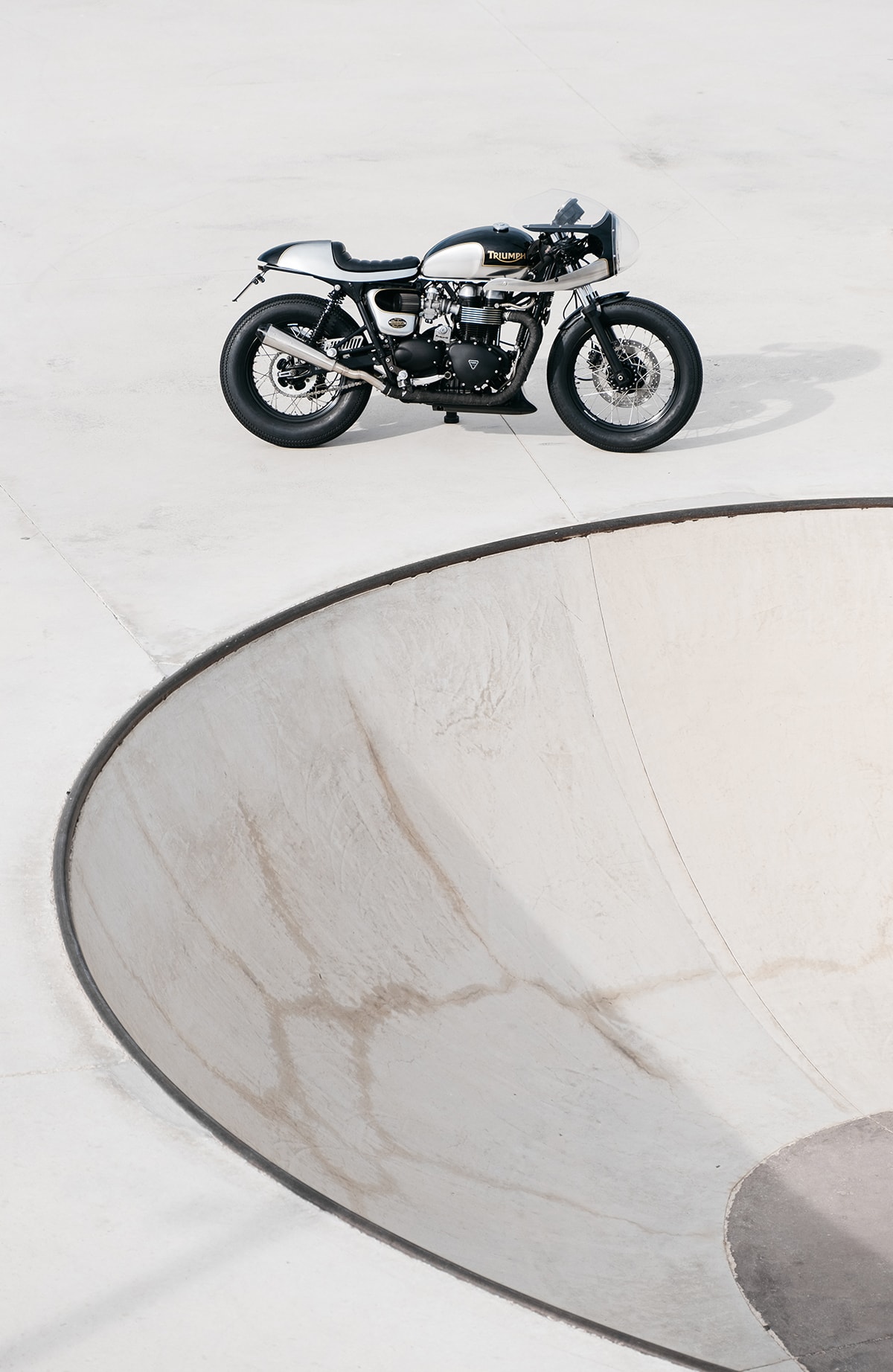 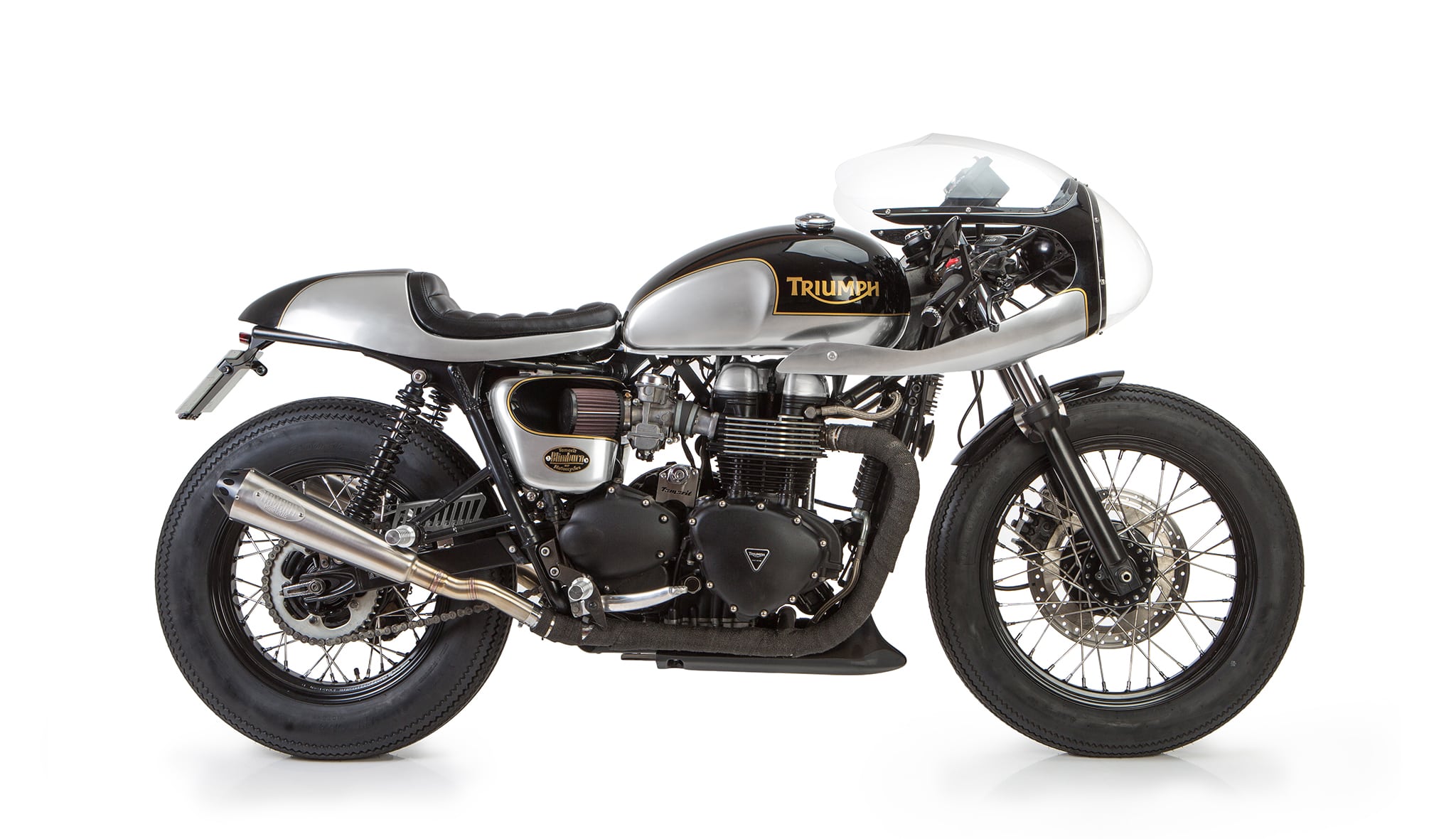 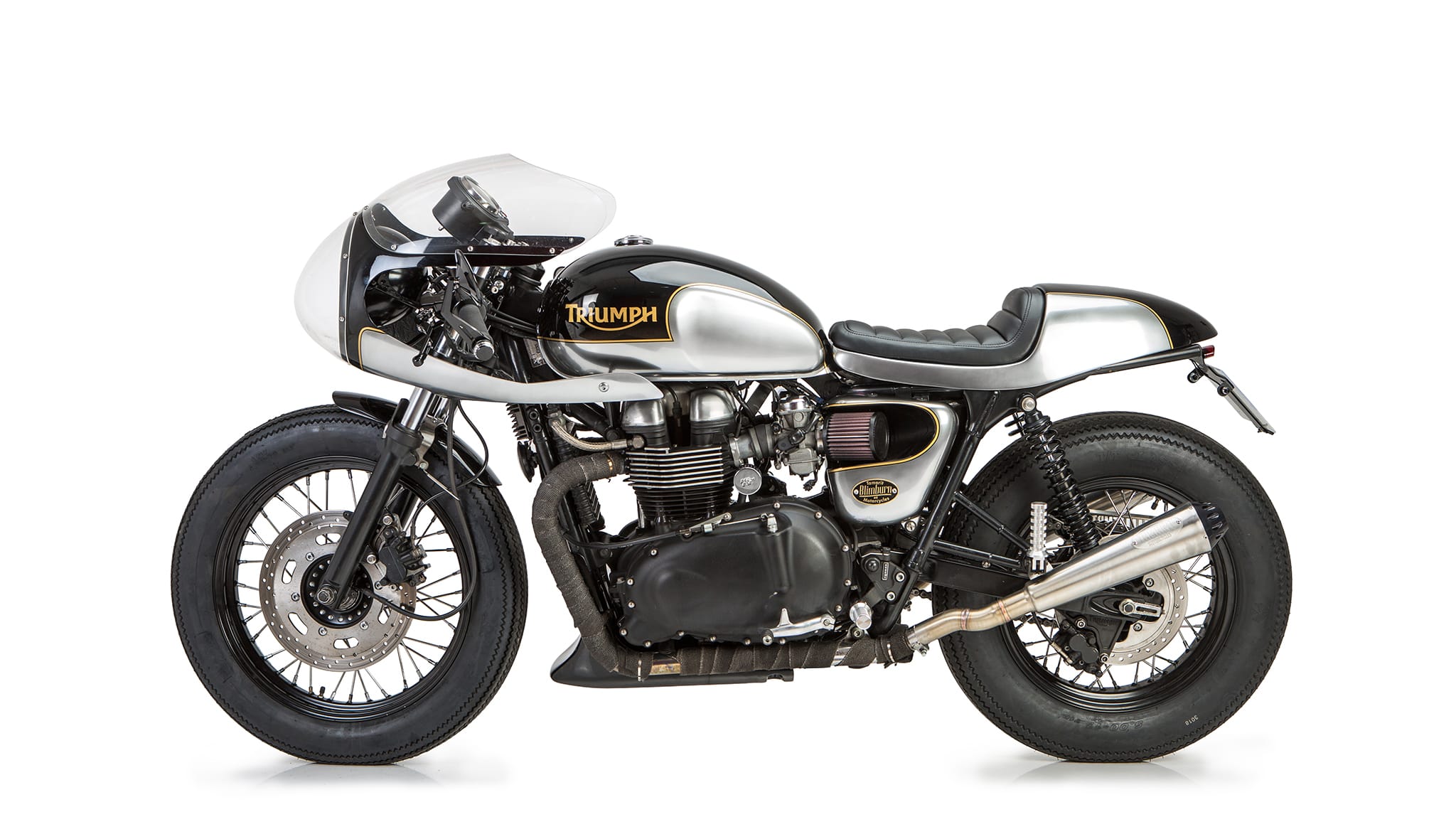 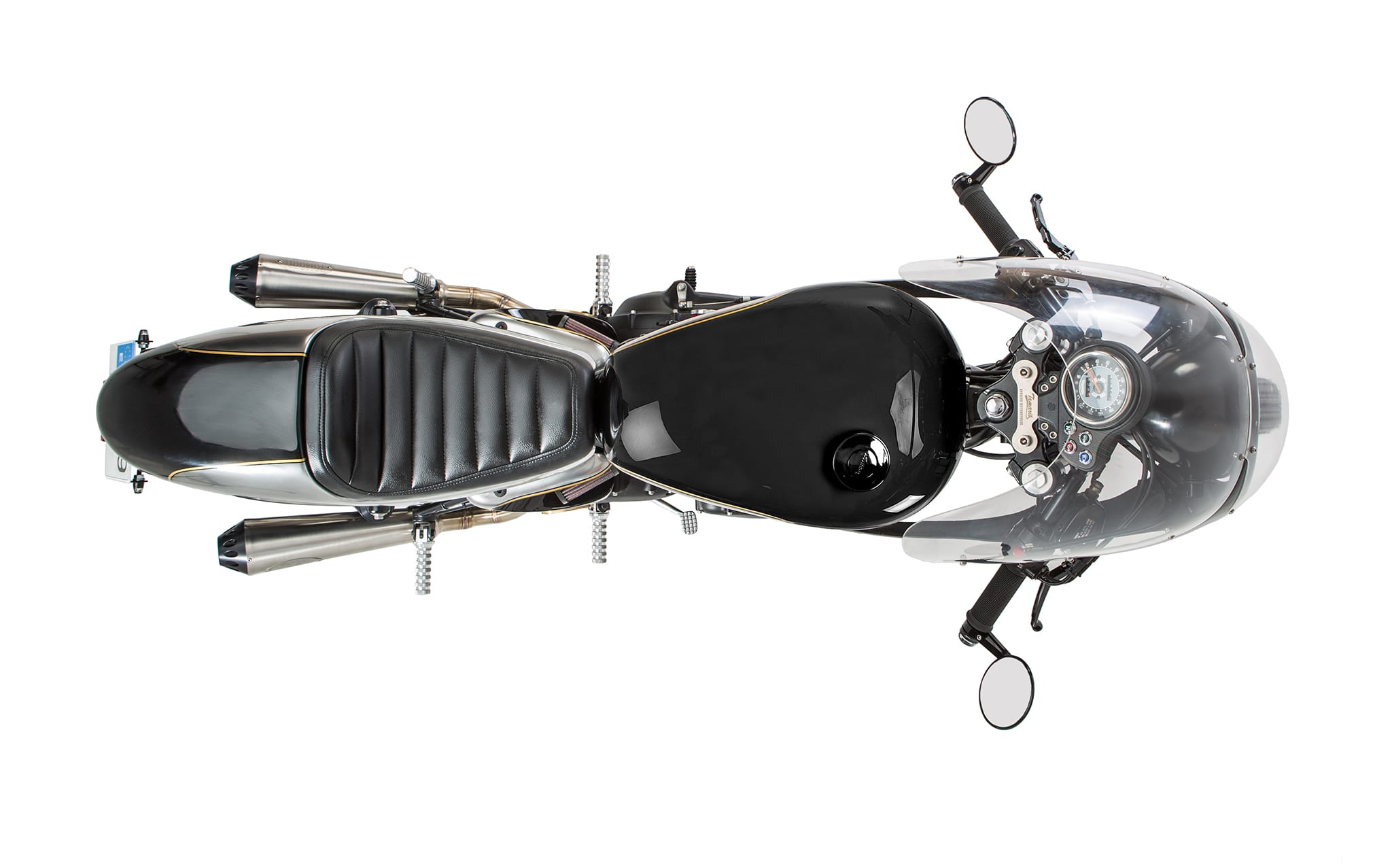 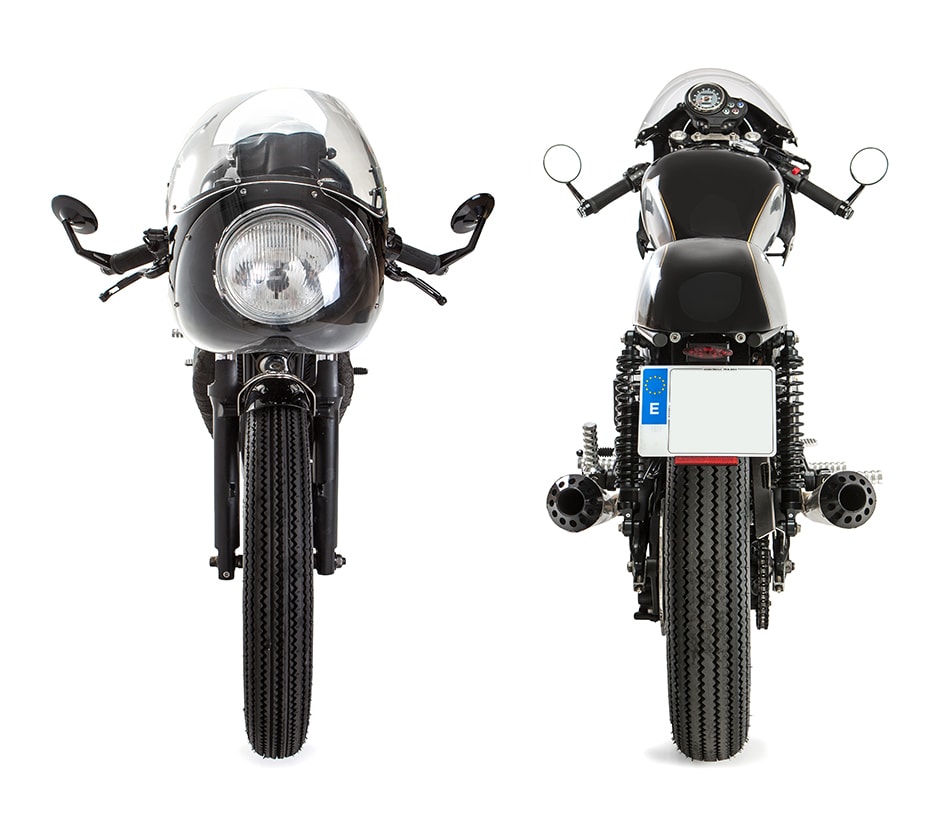