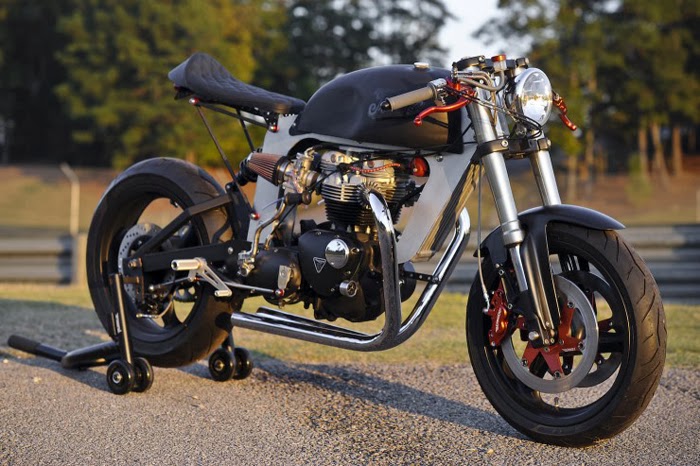 Ever since we saw the teaser video for Kevin Dunworth of Loaded Gun Custom’s Bucephalus, we’ve been salivating for more.  Finally James from Silodrome posted some glamor shots for us to drool over. This bike represents everything we love here at The Bullitt and is a ground-breaking, over the top custom cafe racer.

Bucephalus consists of a relatively popular base recipe – a vintage British motor mated to inverted forks, but has some serious added spice – a custom monocoque frame cut from 7075 aircraft-grade aluminum. The bespoke frame uses the motor as a partial stress member. As mentioned in our previous post, Dunworth designed the frame around the notion of connecting the headtube and swingarm to the engine, which was achieve with both beauty and purpose.

Like much of the bike, the swing arm is a custom piece made from 4130 chromoly and connects the rear monoshock to the frame just under the base of the tank. This bike is so unique and has an incredible attention to detail. The muted tank and minimal seat really allow the frame and motor to take center stage – as they should!

Wish you could park your very own Bucephalus in your garage?  Fret not as Dunworth will build you one to order. Rumor has it, frame #1 has been ordered by land speed record chaser Bart Boucher, who’s ordered a slightly modified Bucephalus that’ll be capable of 175mph unfaired and 200+mph with full fairings.

Photos by Erick Runyon via Silodrome