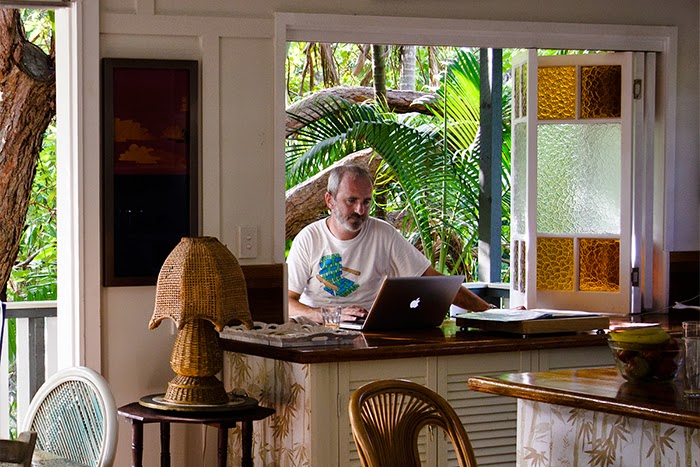 Getting some time with the man behind Bike EXIF

If you’ve looked up a custom motorcycle online in the past 4-5 years, you’ve undoubtedly came across Bike EXIF. Quickly establishing itself as go-to spot for the coolest custom motorcycles worldwide, Bike EXIF is currently getting over 2 million page views a month (no, that’s not a typo) and is steadily growing. Stats that like don’t happen by mistake, and clearly the man behind the helm has figured out a recipe for success.

Bike EXIF was founded by Englishman Chris Hunter who at the time of founding was working as creative director for an ad agency in Sydney, Australia. After falling in love with motorcycles and discovering that there wasn’t a single site out there that covered the material he wanted, Hunter took it upon himself to create one. Building a foundation on clean layout and design while only featuring high-quality content, EXIF quickly grew in readership. For a number of years Bike EXIF was an after-hours affair until 2011 when Chris took the plunge and dove into running EXIF full time.

After bringing Chris and Bike EXIF into our home for so many years, it only feels right to get to know the guy a little better. He was kind enough to answer a few questions and give us some insight into how he got to where he is today.

Pat Flynn: If you were going to purchase a new bike off the showroom floor today, what would it be?

Chris Hunter: Right now, it’d be the new Ducati Scrambler. At around 400 lbs and 75 hp, what’s not to like? It’s the kind of bike I’ve been waiting for, and I think a lot of other riders feel the same way. Unfortunately I have heard that there’s a waiting list already here in New Zealand! 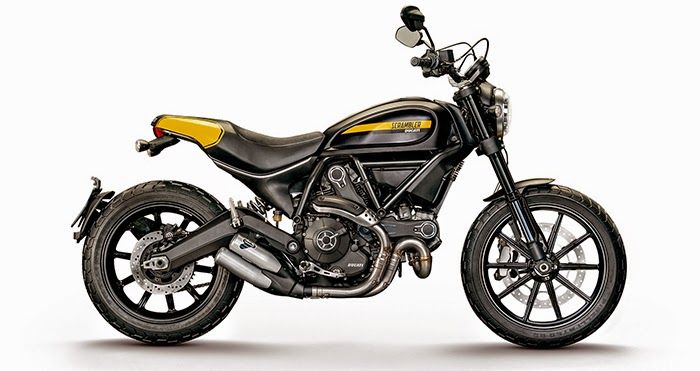 If you could only have one bike for the rest of your life, what would it be?
If I was stuck with just one bike, it’d have to be something that could handle many different roles. Probably something like a KTM 690 Enduro.
What was the first bike you loved, or lusted over?
The first bike that really got my attention would probably be the Ducati SportClassic. It came out just before I took a serious interest in motorcycles, but I remember thinking it looked amazing — the kind of bike I’d like to own if I had a license. 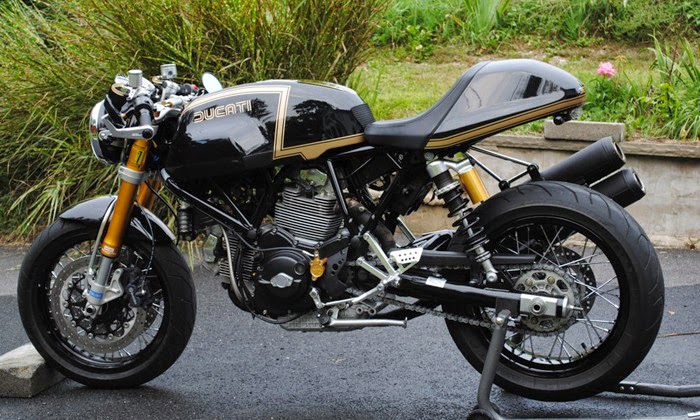 What was the first motorcycle you owned?
I guess a Vespa used for commuting in Sydney doesn’t count! So the answer would have to be a Moto Guzzi V7 Classic. Still have it, still love it.
What do you think is the most beautiful production bike ever built?
A toss-up between the early Brough Superiors and the MV Agusta 750S. I also have a weird fetish for the BMW K1. If venturing off road, would pick the Husky 400 Cross.

The BMW K1 – a face only a mother could love. You’re on your own here Chris!

Do you have an all-time favorite build or builder?
No—there are certain builders I really admire, but no one single builder I would place above all others.
If you could attend any past motorcycle event in history, what would it be?
I love Wheels & Waves in Biarritz, but I wish I’d been to the Legend Of The Motorcycle shows.
Have you ever had a bad motorcycling accident?
No. Or should I say, not yet. I’ve had a couple of major moments, the worst being when a car pulled out of a side street, right in front of me, in inner Sydney. I managed to stop with my wheel almost touching the driver’s door. Words were exchanged. I don’t think you can ever be completely safe, so I always ride with a full-face helmet and an armored jacket.
Have you ever raced on two wheels?
I enjoy watching MotoGP and stuff like the Red Bull X-Fighters, but the thought of donning racing leathers myself has absolutely zero appeal!
What made you decide to create Bike EXIF?
It was really simple: I couldn’t find a motorcycle website that interested me. There were a few blogs profiling ‘Brat Style’ customs from Japan and European cafe racers, but it was all a bit haphazard. I was working as an advertising creative director at the time, so it became an experiment. When things took off rapidly, I quit the advertising world to focus on the site full-time. 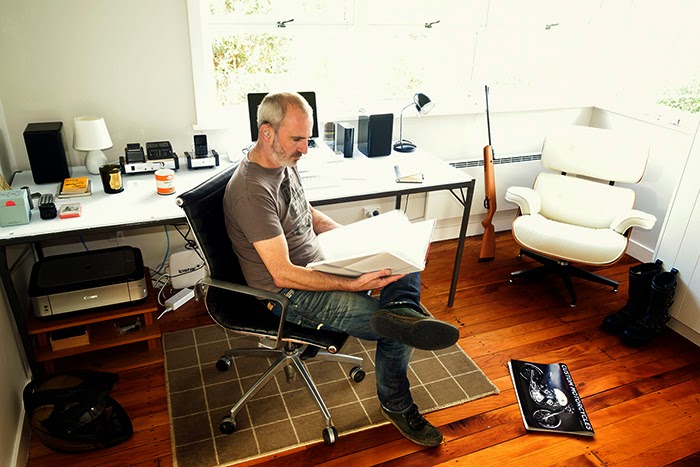 Chris Hunter in his element

What factors do you attribute to Bike EXIF’s crazy success, especially in the beginning?
EXIF was in the right place at the right time. The custom scene was dominated by blinged-out choppers, the mainstream sites were stale, and manufacturers weren’t building bikes that younger riders were interested in. There were gaps in the market big enough to ride a Gold Wing through.
I was living in Australia at the time, and Deus Ex Machina was getting on everyone’s radar. So there was a wave, and EXIF caught the crest of that wave. Since then, it’s simply been a question of doing everything a bit better than everyone else.
It’s helped that the mainstream moto media still hasn’t woken up to the widening market. Too many old men making jokes about hipsters.
Wes Siler made some great points in an article on Jalopnik the other day:
“Know how many people read the “most popular” motorcycle magazine in the US? About 160,000. All of whom are 51-year old white men and most of which live in suburban Orange County.”
He’s right, and that’s why sites like EXIF are booming. Our peak audience age range is 25-34 and nearly a third have a household income of over $100k p.a. They’re into experiences, design and accessible thrills. Not tech specs or track days. Sites like EXIF and its competitors are successful because they satisfy those needs. We filter out the crap.
How do you encourage engagement throughout Bike EXIF’s channels, specifically on-site?
Incoming traffic is evenly balanced between several different sources, and I try to keep it that way. Social media is a big part of the equation, but probably a little less important than it used to be.
Engagement seems to be less about social media these days. You hit the nail on the head with “on-site.” Most social media engagement is not “on site” at all. It’s a click on the Like button and a search for the next ‘hit’.
Facebook in particular is becoming less and less useful as time goes by. It’s also quite a deceptive platform and difficult to master from a geographic point of view.
Sport Rider magazine, for example, has over two million fans on Facebook. But as I write this, less than 190,000 of those fans are in the USA. The rest are from India, Brazil, Thailand, Indonesia, Malaysia, the Philippines and so on.
For me, engagement is about the right kind of people, not just the largest number of people. So it comes back to activity on Bike EXIF itself, measured with unique visitors and page views. I look for incoming visitors to assess engagement.
For example, a bike that gets 500 ‘likes’ on Facebook might deliver three times as much traffic to the site as a bike that gets 1,500 likes. Because people are clicking the link to learn more about the bike, rather than clicking the ‘like’ button and continuing down the Facebook newsfeed.
With so many competing sites out there, how does Bike EXIF differentiate?
We’re taking a more holistic approach to the custom world, with how-to articles, shop visits, Top 5s, and gear guides. But bike profiles will always be at the core. That means the best bikes and the best photography.
In return, builders get more exposure and more business leads. It’s a win-win for everyone. Running a custom bike site is not just about satisfying your readers’ desires—it’s also about promoting the builders who deserve exposure.
You seem to have managed to monetize your sites without making them feel crowded with annoying ads. How did you find balance?
Design is critical, and I also keep the ad prices high. I would much rather have a small number of advertisers paying higher prices than a lot of low-value advertisers and a site that looks like a pinball machine. This works for the advertisers too: their ad is not competing with 16 others, so they get more clicks. It most cases, it actually works out cheaper for the advertiser.
You must get slammed with so many builds, how do you decide on what content to publish and when to post it?
I see hundreds of bikes a week. It’s difficult, but if something jumps out at me right away, then it’s likely to be a winner. There’s also gut feeling involved, and feedback from reader emails. You start to see trends … I think the ‘cafe racer’ style is on the way out, and bikes with more of a tracker vibe are coming in. Anything with checkered stripes on the tank or dodgy welds goes straight into the junk pile.
Is there anything in the custom world today that you wish you saw more (or less) of?
I’d like to see more risk-taking. This is purely from a publisher’s point of view. Successful builders who have a ‘signature style’ would be crazy to drop the ‘look’ that brings in the cash, but I’d like to see new builders experimenting with different styles. Rather than mimicking what CRD or the Wrenchmonkees are doing. For that reason I admire builders like Max Hazan, Scott Jones, El Solitario, RSD and Revival Cycles. They push the boundaries. 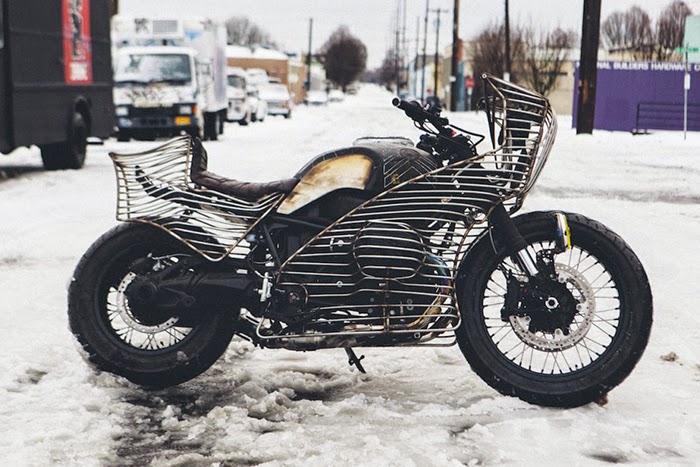 I’d like to see less pipewrap. I don’t have a bee in my bonnet about it like some of our readers do, but really, it’s getting overdone.
But most of all I’d like to see a little more respect going around the custom scene. Some people are very quick to disparage bikes or styles that don’t fit their world view. I don’t like choppers, but I don’t feel the need to go on chopper sites and diss the builders, or start trolling the people who do like them.
What advice do you have to builders to get noticed?
Focus on the photography. (I’m assuming there are no question marks around craftsmanship or aesthetics.) It is not enough to ask your brother to take some shots against the garage wall using his point-and-shoot. If you have built a bike to a pro standard, get a pro photographer to shoot it. It is always the photos that attract attention first
Between BikeEXIF, CycleEXIF the other publications you write for – Bike (UK), BikeCraft (USA), and Moto Navi (Japan) – do you ever get any time away? If you had 4 completely free days, what would you do with your time?
I’ve stopped writing for print magazines now; I resigned my Bike magazine column a couple of months ago. It was one of the hardest decisions I’ve had to make, because I love that magazine dearly and have great respect for guys like editor Hugo Wilson and art director Paul Lang. But there were simply not enough hours in the day, and it was adding to my stress levels.
If I had four days off, I’d probably hop on a plane to Queenstown on the south island of New Zealand. Or across the Tasman to Silky Oaks Lodge in Australia’s Daintree rain forest. It’s the perfect place to unwind.
Cheers Chris. We love keeping up with you on Bike EXIF but hope you get those 4 days off soon! – PF
Bike EXIF website | Facebook | Twitter | Instagram