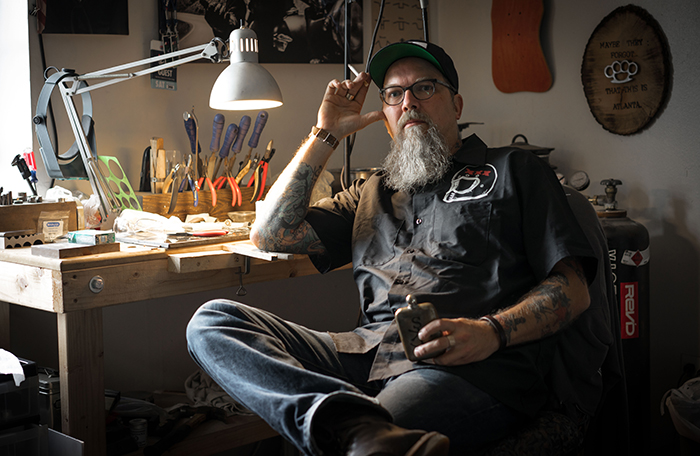 Steve West is one of those larger than life characters. Full of energy and always up for some good old fashioned fun and mischief. His personality is contagious and the more you speak with the dude, the more you want to just keep him talking…which isn’t too hard to do. For those unfamiliar with the name Steve West, or his business Silver Piston, wake up! Steve left his corporate life behind to pursue his artistic passions which translated into his company, Silver Piston, where he makes “kickass jewelry for people who kick ass”.

Silver Piston has established itself as the go-to shop for handmade rings and jewelry. He’s a passionate motorcyclist and has a strong connection and respect from the moto scene. I’d been kicking the around of doing an interview on Steve for the blog for a while and finally got around to asking him some questions.

Without further ado, here is a brief conversation I recently had with the ATL-based madman:

Hey Steve, thanks for taking some time today to answer some questions for us. We’ve known Silver Piston, and you, for some time now but we wanted to take a few beats to really get to know you.

Can you tell us a little about yourself? Where you live, do you have a family, etc.  I live in downtown. I’m married with a 19 year old kid, 5 dogs and 6 chickens.

How did Silver Piston come about, and when was the moment when you were going to turn this into a full-time gig?  I’d been doing jewelry making as a hobby since 2009 and in November 2013 I made what would be the first ring of Silver Piston. I cut out an indian head from a buffalo nickel. I got pretty excited and felt like I was onto something. I started selling in January of 2014 while working full-time. After changing jobs to an ad agency later that year and deciding it wasn’t for me, I started it full-time. 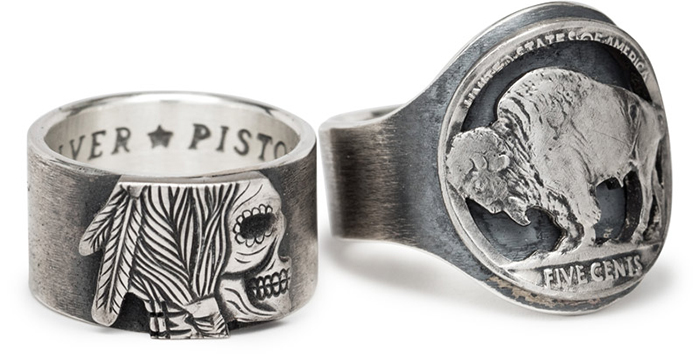 Silver Piston seems pretty tied to the motorcycle community. How did that connection come about? I got noticed in the moto community in 2014 when Alicia Elving (Moto Lady) posted up some of my jewelry. The next day I had an email from Jason Paul Michaels if I could help him replace a like the one his grandmother had made him. That same morning I got an email from Garreth Roberts from the Bike Shed MC wanting to do a write up on the Bike Shed’s site.

Your workshop is in a pretty unique location. Tell us where it is and how you got there. Yeah, it’s a pretty great spot to be in. Last year I was looking around for a larger studio around downtown Atlanta without much luck. One day over at the Fuller Moto garage I was having beer with Bryan and he offered me a spot in the corner of his garage. I moved in there the first of December 2016 and been loving being around there. Going to go get a cup of coffee on the other side is a far better walk past a bunch of cubicles.

I’ve seen that you’ve been messing with some new products. What are you working on these days? I’ve been working on some cuffs, a couple of new rings and partnering up with a couple of shops to carry some rings as wedding rings.

Aside from jewelry making, what else does Steve West like to do with his spare time? I’ve been doing photography for fun and just got around to putting together a portfolio, SilverPistonPhotography.com. I’m interested in some work that way that let’s me work with a camera.

You’ve had a bike stolen lately, and have a WSM build in process. One is pretty shitty, but the other is pretty exciting. What did you replace the stolen Hyper with, and what’s the progress update on the Leggero?

Yeah, bastards took my bike in the middle of the night. I’d bought a 2012 Ducati Hypermotard SP because the price was good but I had to get a loan to cover some of it. About 6 weeks later it was stolen from out front of the house. What really sucks is I’d just had the valves done and new tires. After the insurance paid out, I bought a 2003 Kawasaki ZRX1200. I’ve had 4 Ducs and a Triumph in the past 6 years and wanted something completely different. I love this Japanese muscle bike. Around town it’s pretty mild mannered but twist that throttle and that idea gets replaced with a lot of, “Fuck Yeah.”The good news is I do have a Leggerro from WSM being built here in town. It’s not going quick because I’m only settling on best things for it and that takes time. As much as I want it on the road, I want it to hit the road with nothing left to do. 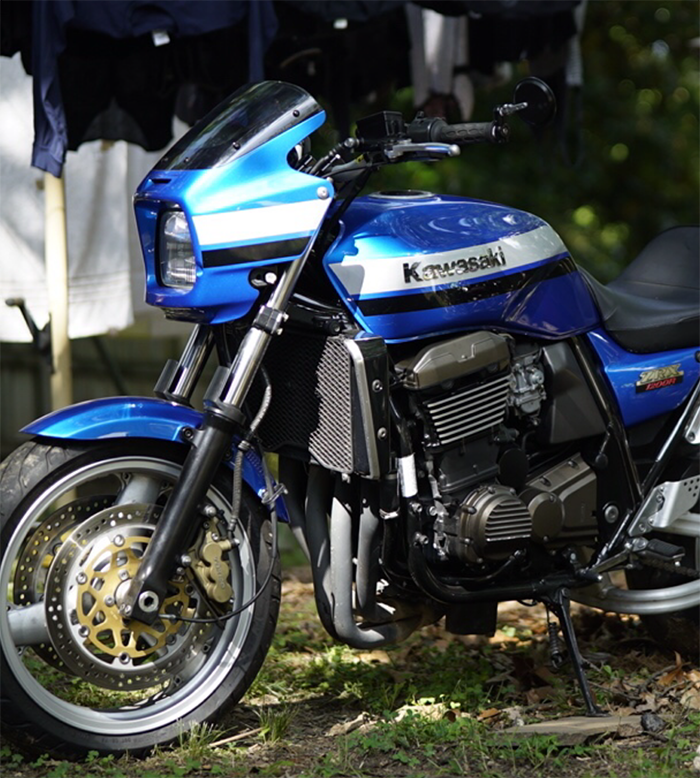 If you were going to purchase a new bike off the showroom floor today, what would it be and why? I’d get a BMW R Nine T. I just love the hell out of those bikes and the customization can be rad. I haven’t even ridden one but still pine for it. I really think Ola Stenegärd knocked it out of the park.

If you could only have one bike for the rest of your life, what would it be? I guess I’d have to say a BMW 1200GS since they apparently run forever. 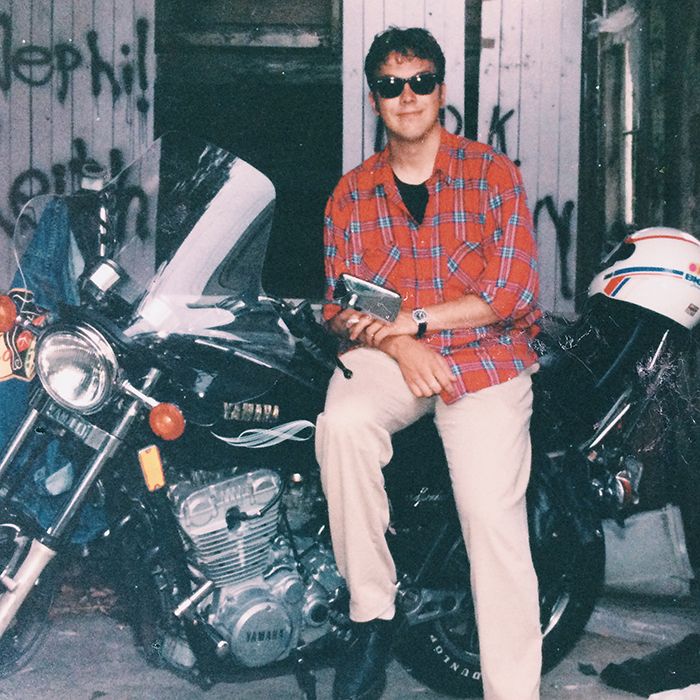 What was your best experience to date on a motorcycle? That’s a tough one that I can’t come up with an answer for. That time I rode up to Canada and took a ride to the top of Mt Washington in NH. Pretty much every single time I’ve ridden Deals Gap. Maybe the first time Ryland tossed me the keys to recent Classified Moto build. Any number of times Bryan Fuller has done the same with one of his many builds or the same with Tony Prust’s BMW. Hell, that first bike when I hit the road the day I got out of the Navy and got as far as I could. Kevin Dunworth still hasn’t let me ride one of his builds…sad.

Do you have an all-time favorite build or builder? That’s a loaded question. I’ve been lucky enough to befriend some of the best builders out there and value their friendship because they’re still people I look up to and respect immensely. With that said, I’ll say Walt Siegl. When I got back on a bike in 2011 and found BikeExif.com, his Leggerro series literally took my breath away. When I met him at the Brooklyn Invitational a few years ago, I shy as a school boy talking to him. Now I make key fobs exclusively for his builds that go out with his new builds for customers. The first key fob went to Brad Pitt with the Leggerro he bought.

If you could attend any past motorcycle event in history, what would it be?I’ve yet to get to Wheels and Waves, so I’d say the second one. They would’ve had show worked out and it’d just be a big ole party.

Have you ever crashed a bike? Yeah, I have and it was a bummer. I was on the ramp to the highway to meet a friend for a ride when I washed out and low sided. I don’t remember it happening but I snapped my collar bone.

Have you ever raced on two wheels? Nope. Not cool enough for that.

What do you think is the next big trend or movement in the custom motorcycle world? There have been so many different trend in the last several years, I couldn’t really begin to guess. I love that the new custom moto scene keeps changing and evolving. As long as that keeps happening, it’ll keep being relevant. I do like that OEMs are seeing the value in making bikes customization a part of the design. That’s going to make buying a used bike in a few years easier to make your own.

What do you think it should be? I don’t care as long as we don’t go back to the TV choppers.

If you had 4 completely free days, what would you do with your time? I’d love to ride from LA to San Francisco and take my time about it.

Thanks, Steve. Keep on doing what you’re doing! And, for anyone reading this that hasn’t ordered a Silver Piston ring yet, quit dragging yer ass, and go order one today!